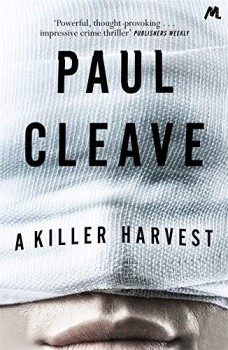 DIs Mitchell Logan and Ben Kirk of the Christchurch Police Department, New Zealand, know the man in front of them is a sadistic murderer, so they should have been ready for his violent attack. But within minutes Mitchell is dead and Ben sees only one way this is going to end.
Joshua believes he's cursed. He was born blind, his biological parents died years ago, his aunt and uncle became his mother and father, but now Dad is dead. However, Joshua doesn’t know Dad has left him his eyes, and within hours of his father’s murder, Joshua is in the operating theatre.
Joshua, already suffering with confusion and guilt, experiences strange, menacing dreams and memories; glimpses into a past he hasn’t experienced. But the real danger about to threaten Joshua is in his new reality.
I so wanted to like this book: the cellular-memory premise is intriguing and there are several interesting ideas and unsettling moments. But the writing and believability of the story are inconsistent at best.
The beginning feels rough, unedited, as if the author has had a handful of ideas for the whys and wherefores that he has forgotten to streamline. This includes an entire chapter devoted to a pill-popping intern who stops along the way to ‘pop’ and trips on the stairs, dropping the packages. Yes, one of the eyes bounces down the stairs (cue a large eye roll!)
To make matters worse, our druggie intern licks the eyeball clean because it got dirty before shoving it back into its package. This ham-fisted, unsubtle shadowing for upcoming conflict made me itch to throw the book across the room. The scene was utterly ridiculous. The intern’s presence, let alone his backstory, conflicts and life-struggles was extraneous, as the reader never meets this person again.
The intern was not the only superfluous character. And unfortunately, because of generic dialogue and indistinct names, these underdeveloped extras were more like cling-on plot-tools, adding to the confusion rather than offering clarity.
With the many overcooked sub-plots and conflicts there was too much going on; further editing and paring back, focusing more attention and development on a few key points and characters would have made for a stronger story. Points like Joshua’s parents’ deaths and his ‘curse’, which only received page-space once, even though it was supposedly a major issue, did nothing to drive the story or help connect with the character.

I love ghosts, vampires, time travel et al, so I have no problem with cellular memory. But there was a lack of a feel of realistic science fiction let alone subtlety in the execution of this concept. I couldn’t decide whether the author’s aim with cellular memory was to convince or just shock his readers. For instance, one of the characters asks a surgeon to ‘give him’ his comatose fiancée’s eyes in the hope the cellular memory might tell him who her assailant was. Whatever happened to suspending disbelief!
That said, A Killer Harvest is an easy, fast and satisfyingly dark read that raises fascinating what ifs and ethical questions.