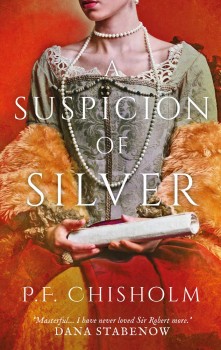 A Suspicion of Silver

Sir Robert Carey, swashbuckling Elizabethan courtier and cousin to the Queen, hunts a would-be assassin of Scottish King James on both sides of the border.

After eight hugely enjoyable and successful adventures, swashbuckling Elizabethan courtier and cousin to the Queen of England Sir Robert Carey has managed to keep his head – and other parts of his body he considers rather more important!

Now, as 1593 begins, the Deputy Warden of the West March is riding from Edinburgh on the trail of a killer who has twice tried to assassinate King James VI of Scotland – the man who will succeed the Virgin Queen and unite two nations who have been at war for hundreds of years.

Jonathan Hepburn, the would-be regicide, could be heading for the continent and his Spanish paymasters. He could also be heading south into England where his family – his real name is Joachim Hochstetter, son of a German family from Augsburg – runs a mining operation at Keswick in the Lake District.

But Sir Robert has a major problem. His dour and difficult henchman, Sergeant Henry Dodd, has disappeared, presumed dead, on the snowy Scottish moors, but his body cannot be found.
Carey must first escort Dodd’s widow to her home at Gilsland through the treacherous border country where raiders from both sides are involved in an ongoing clan war.

If Hochstetter is in Keswick, how far will the German miners go to protect him? He may be outlawed in Scotland, and King James certainly wants him dead, but Carey has no authorisation to kill him in England.

Predictably, the Hochstetter family is obstructive. But it soon becomes obvious they have more than the fugitive to hide. And the arrival of a well-known Scottish reiver, Wattie Graham of Netherby, merely adds to the confusion and offers the possibility that the Queen has been systematically defrauded over the tax on precious metals.

Chisholm, the pen name of Oxford history graduate and journalist Patricia Finney, has produced yet another character-driven story, fast moving and packed with little-known, but fascinating, historical detail

She manages to bring realistic details of daily life in 16th-century Britain into her tales, set in a violent time where political cunning, effrontery, and vengeful machination make today’s players look amateur.

Her meticulous research – much of the background is based on historical fact – is presented in a way that is genuinely interesting without ever being allowed to swamp the storyline with too much information.

And in Carey she has the ideal hero. Impulsive, courageous, often too clever for his own good, he is Errol Flynn in a ruff. His mercurial character allows him to shift from philosophical musings to violent action – and he is totally in keeping with a man of his class and time, wondering about the strangeness of women reading books, while at the same time planning to buy some for the intelligent woman he hopes to make his wife when he can find a way of getting rid of her unpleasant husband!

Through an always interesting and devious series of detours Chisholm displays a masterful hand in drawing several plotlines from her previous novels to a resoundingly satisfying conclusion in a final chilling chase. This new addition to a top-notch series is one of her best – culminating with the setting of a terrific hook on the last page!