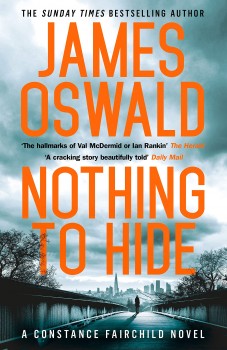 Much to her frustration, DC Constance Fairchild is still kicking her heels whilst suspended on full pay. That’s what happens when you take down a significant number of your colleagues on charges of corruption, with the cherry on top of the cake being the prosecution of Roger De Villiers, a previously well-respected member of the aristocracy, for abusing his own daughter and other young women. The trials are going to be high-profile and until then, Constance is under orders to keep a low profile.

That’s not quite as easy as it sounds, and Con is catapulted back into the spotlight when she stumbles on a badly injured young man who’s been horrifically mutilated and left for dead near her flat. There are elements of the attack that are reminiscent of other ritualistic murders in other parts of the country. In an attempt to get Con away from the media spotlight in London, she’s dispatched to Edinburgh to talk to the young man’s mother, in the hope of learning more about him and why he ended up nearly dying on the streets of London.

James Oswald has an excellent track record when it comes to a combination of police work and the supernatural and I very much like the way he’s brought his two series together in an oblique way with Con Fairchild’s trip north, as she stays with Rose, an old friend of her aunt’s. Followers of Oswald’s series featuring Edinburgh DCI Tony McLean will immediate recognise this old family friend as the cross-dressing medium Madame Rose, with her numerous cats and a house that’s capable of wrapping its occupants in the warmest of comfort blankets.

Con Fairchild, born Lady Constance, a title she tries hard to leave behind, is a good series lead. She’s determined, bordering on occasionally reckless. She knows when she has bad ideas but isn’t always very successful at listening to her own voice of inner reason. I also like the harassed, plain-talking and somewhat irascible DCI Ed Bain of the National Crime Agency, who mostly comes as a pair with Superintendent Diane Shepherd, who’s that rare thing in crime fiction, a likeable senior officer.

Oswald’s depiction of a sinister Christian cult comes over as entirely believable, especially when set against the backdrop of the rise in right-wing fundamentalism we’re witnessing in the UK at the moment. The plot of Nothing to Hide hung together well for me, and I’m very happy with the subtle blend of two series into a seamless whole. Con hasn’t met Tony McLean yet, but I hope that’ll be something to look forward to in the future, along with more of the enigmatic Madame Rose and her cats.

Oswald always delivers a sharp police procedural with an added element of darkness and something just a little out of the ordinary to spice up the mix.