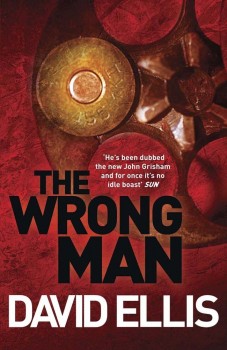 Lawyer Jason Kolarich defends an ex-soldier accused of murder. Barred from an insanity defence he has to show his client’s innocence.

Jason Kolarich’s courtroom style impresses the aunt of an Iraq veteran accused of murder, and at her request takes over as defence counsel. While Jason’s client Tom is clearly mentally disturbed, the judge rules out an insanity defence, and Jason needs to create some doubt of Tom’s guilt. This initially looks like an impossible task, but facts soon emerge which seem at odds with the prosecution case.

The time before trial is short, but Jason has the help of his partner Shauna, new recruit Bradley, investigative agent Joel, and Tori, a woman who he rescued from harassment and in a short time has become very close. The team uncovers what appears to be a conspiracy, but will they be able to assemble sufficient evidence to convince the court?

As with David Ellis’s previous Jason Kolarich thrillers, the author’s legal experience underpins the courtroom action and presents some interesting aspects of the conduct of US criminal trials. Jason himself is cocky, an ex-jock with a firm belief in his own qualities, but if you are inclined to dislike lawyers on principle you may not find him entirely sympathetic. The episode in this book where he personally inflicts bodily harm, including breaking fingers, to extract information leaves a rather bad taste. Essentially he is a man who makes sure he always wins, usually with a smart quip on his lips – the James Bond of the US courts.

Ellis does cook up a decent thriller, and in The Wrong Man shows much of the skill we have come to expect. The plot does take some liberties, however. For one thing, he sets up the arrest and initial police interview with Tom so that the prosecution is able to exclude an insanity defence. Jason muses that the judge is wrong in approving this decision and there may be grounds for appeal, but in fact Tom is so clearly ill the ruling looks inexplicable.

For another, Ellis attempts to build tension by omitting reference to some rather glaring holes in the prosecution’s case until the reveal when the court case reaches its climax. The rapidity with which Tori, a bar pick-up, is made privy to his innermost thoughts seems very odd.

If you can swallow the plot without indigestion, you still have to accommodate some abrupt changes in style. Towards the close we have an episode where two of the baddies get a risible Home Alone treatment, shortly followed by the nasty finger-breaking incident referred to earlier. When the author seems to be having difficulty taking his book seriously, it is going to be hard to persuade readers to do so.