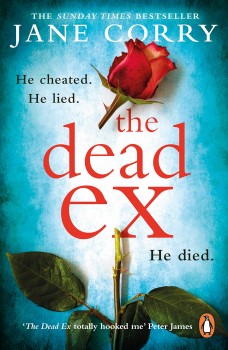 Vicki’s life was already damaged. Now, with her ex-husband missing and the police sure she is involved, everything is in freefall.

2018: Vicki used to be David’s wife, until he dumped her for Tanya, his personal assistant. Now Vicki lives on the southwest coast of England and runs her aromatherapy business from the safety of her home. But her fragile existence is about to crash; David is missing, and the police think she has something to do with his disappearance. She is vehement in her denial but cannot be sure. She suffers with epilepsy that plays havoc with her memory.
2007: Scarlet, though only eight years old, is her mother’s sidekick. She passes on drugs in exchange for money on behalf of her mum. But her fragile existence is about to crash; her mother is arrested, and Scarlet finds herself in an abusive foster home.
2017: Helen is a photographic student who wheedles her way into a work experience post in David’s company. But she has a far from fragile agenda that has nothing to do with photography. And David is quick to respond.
2018: three people whose lives will converge with the discovery of a murder victim.
Jane Corry is a name that had filtered through the ether recently as one associated with psychological thrillers, unreliable narrators and time-hopping, so I was excited to settle down with her latest book. I expected a stroll through a pleasingly nasty garden with dark corners and half-hidden poisonous plants. Instead, I trudged around an overgrown plot, tripping over a plethora of signposted, sprawling weeds.
Vicki is a character who smacks of Girl on a Train, with epilepsy as her excuse for blackouts and memory loss. I am sure the epilepsy is to make her a more likeable version of Rachel, the alcoholic who is reeling from her breakup in Paula Hawkins’ aforementioned novel. Unfortunately, too many of the references to epilepsy smack of the regurgitated research. And Vicki upping sticks every time her customers get wind of her having seizures sounds more than far-fetched. It is a weak, sympathy-seeking ploy. The author has moulded Vicki to give her flaws whilst generating sympathy, but she is unlikeable. Moreover, she is inconsistent in behaviour, introspection and action with the person the reader discovers she was before.
Scarlet’s voice is intriguing, and almost believable. However, her dire circumstances are insufficiently developed, resulting in a hackneyed portrayal of a little girl thrown into the care system. Yes, abuse happens, but a child torn from her mother, however inadequate the mother is, can feel traumatised without the system hurling her into the clutches of pantomime-style foster parents. Although many little girls hop between being naïve and precocious, Scarlet’s behaviour is unconvincing.
Helen is no enigma. What remains a mystery, however, is what she is trying to achieve with David. Yes, she has an agenda, but her actions seem nothing more than a means to a cheesy ending in her character arc.
The story meanders to a longwinded, trite non-existent climax that had me grinding my teeth. Not only does the baddy blurt a rambling raison d'être, but then half the other characters also jump on the bandwagon. This is a book destined for Marmite reactions.