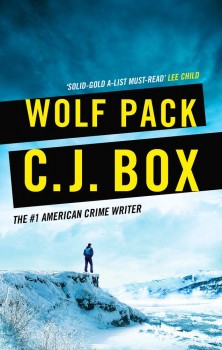 Joe Pickett is re-installed as game warden for Wyoming’s Twelve Sleep County, and takes action against a drone operator, which brings him into conflict with the FBI and a team of killers known as the Wolf Pack.

Joe Pickett’s problems last time out, which saw him the victim of a dispute between the current state governor and the last, have been resolved. He is back doing what he loves best, protecting animals in Wyoming high country. He has a new house, and wife Marybeth and youngest daughter Lucy, the only one still living at home, are doing well.

Joe receives a call from Katelyn Hamm, warden for an adjoining area, reporting that a drone has been flying in her patch over herds of mule deer, causing panic and injury. Joe gets in touch with Nate Romanowski, an old friend and falconer, to help. The three combine their efforts to good effect, and Joe spots a licence plate before the operator makes off, a licence plate he has seen before.

Eleven hundred miles south, a different set of characters are in action. The Wolf Pack is an assassination team from Mexico sent by the Sinaloa cartel to eliminate several people under FBI witness protection. Professional and completely ruthless, they complete a stage of their assignment and start on the next, moving north.

Joe and Katelyn begin action against the drone operator, but find the culprit, Bill Hill, curiously confident that his friends in government will ensure any charges are dropped. A meeting is called between local law enforcement and the FBI, who insist their priorities must take precedence, but the matter is still unresolved when the Wolf Pack arrive to drive matters to a very bloody conclusion.

Pickett book 19 is every bit as good as its predecessors. We see Joe at work, as usual trying to give the wildlife a fair shake against the locals, many of whom regard it as their God-given right to set traps, kill, maim and torture animals for the pot or for pleasure. The FBI and the Wolf Pack provide equally challenging foes but Joe shows that despite his love of wild creatures, he is no softie. Neither is Nate, although he is contemplating marriage, something which until recently looked very unlikely.

The impact of drugs entering the US from Mexico is increasingly featuring in many crime stories, and one can see why. Here the featured narcotic is fentanyl, a synthetic opioid 50 times more powerful than heroin, stated to be responsible for over 70,000 deaths in the US in 2018.

As usual with the Pickett stories there is plenty of action, with enough links to the domestic to add to the drama. Here Bill Hill’s son is the boyfriend of Pickett’s daughter Lucy, which makes the final showdown all the more tense. The Mexicans make a relatively exotic contribution to the Wyoming backwoods, not to mention the homicide rate, which briefly rises to the spectacular.