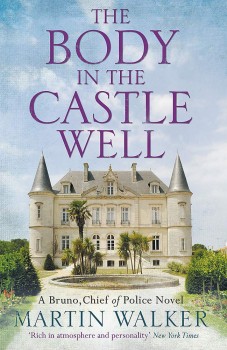 With a title like The Body in the Castle Well, there are no prizes for guessing what’s happened to American art student Claudia Muller who is reported missing at the beginning of the 12th outing for Bruno Courrèges, Chief of Police for the Vézère valley, the heartland of the Dordogne region of France.

Claudia, well-connected and rich, was staying in the picturesque village of Limeuil, studying with local expert Monsieur de Bourdeille as she worked on her doctorate in art history. She had been last seen attending a lecture in the castle of Limeuil and had left to go home immediately the lecture ended, saying she didn’t feel well.

With the help of Balzac the basset hound, Bruno tracks the missing woman to a deep well in the castle grounds, which had been left uncovered by workmen doing some renovations at the castle. An impromptu descent by Bruno is enough to ascertain that there is indeed a body in the well, which is quickly recovered – along with a cat (alive) – by the local pompiers.

Bruno has to work through a long list of attendees at the talk, which promptly casts suspicion on a wide net, whilst having the dead woman’s equally rich and well-connected mother and her own private investigator breathing down Bruno’s neck. Claudia’s parents are divorced, which brings a double dose of problems and it’s quickly clear that Bruno and his colleagues will need to watch their backs as they attempt to ascertain whether Claudia’s death was a tragic accident or something more sinister.

Bruno, now covering the whole of the Vézère valley from Limeuil in the south to Montignac in the north, is now a one-man crime magnet in a much wider area than his beloved home town of St Denis, which gives an even wider scope for former journalist Martin Walker to milk the rich history of the Perigord region, famous for its caves and castles. Every book proceeds by way of a series of fascinating bunny-hops, each landing on a different aspect of the history and culture of the area. Every book has a different historical angle and this one concerns art history.

As an avid watcher of TV’s Fake or Fortune, I was at home in the background to this book, and enjoyed the fruits of Walker’s latest research as Bruno delves into the unfamiliar and distinctly murky world of expensive art, where provenance is king, and the value of a piece of art can sky-rocket if it is proved to be by a certain artist – and equally well plummet if the provenance turns out to be at best dubious and at worst faked. This is the suspicion that hangs over de Bourdeille, the eminent art historian who drew Claudia to Limeuil.

The story behind the Body in the Well is as well researched as I’ve come to expect from Walker and takes Bruno back to some solid police work as he follows the evidence to work out whether Claudia’s death was accident or murder. There are the inevitable dinner parties with loving attention paid to the menu and Bruno’s mouth-watering culinary expertise, and the equally inevitable appearance of Bruno’s irritating on-off girlfriend, local riding school owner Pamela.

I’m afraid she only has to turn up to ramp up my irritation by several notches, particularly when she decides that she wants Bruno back in her bed, and naturally all she has to do is crook her finger for him to come running. I’ve got a lot more time for Bruno’s equally on-off relationship with Isabelle, who has no intention of giving up her high-flying career in Paris for the quiet life in Bruno’s beloved Perigord, although there’s nothing particularly quiet about the murder rate in the area!

If you read the Bruno books for the local colour, you certainly won’t be disappointed. As an aside, you’ll get a glimpse into the fascinating life of Josephine Baker, celebrated singer, dancer and war heroine whose life and work is celebrated at the nearby Chateau des Milandes, which is also well worth a visit. Bruno’s friend Amelie will be performing in a concert there, which gives scope for more history, as well as allowing suspicion to fall on the recently released Laurent, who’s served ten years for causing several deaths in a road traffic accident while being just over the legal limit for alcohol in his blood and who is now working with the birds of prey at the chateau.

The Body in the Well is a good addition to the series, with plenty going on as Bruno navigates his way through an unfamiliar world, using what another famous detective would have referred to as his little grey cells to unravel the mystery of Claudia Muller’s death.