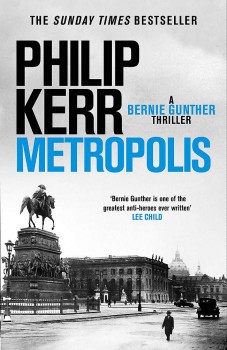 In Weimar Republic Berlin, Sergeant Bernie Gunther transfers to the murder squad and is designated to investigate a string of murders of prostitutes.

The death of Philip Kerr in 2018 was a great loss to fiction. This final Bernie Gunther book is set in 1928. After his wartime service, Bernie is a Berlin policeman, and recognition of his reliability and enterprise earns him a transfer from Vice to the Murder squad.

Gunther is immediately assigned to the major ongoing case – the serial murder of prostitutes by someone who takes their scalps as a memento. There is public revulsion at the news, but plenty who have little sympathy. Hardship has reduced many women to prostitution as the only way to stay alive, and life is cheap.

Public concern becomes rather more elevated when another series of killings becomes apparent, this time of disabled soldiers who can be found begging anywhere people congregate. It is only when Gunther finds a connection between the two cases that the police look like solving both. He takes to the streets on a wheeled cart hoping to draw the attention of the culprit.

Gunther’s movements around the poorest parts of the city provide a detailed picture of a city renowned at the time for dissipation and debauchery. Sexual licence and respectability do battle, with art reflecting all shades of opinion including Brecht’s Threepenny Opera which is being staged at a theatre which Gunther uses as a base. Right-wing groups including the rising Nazi party and the communists fight it out on the streets, with discontent fuelled by poverty and political uncertainty.

As usual, Kerr mixes his fictional characters with real persons, including those who subsequently had a career under the Nazis and those who fled Germany while there was still time, Gunther’s superiors in the police and other public figures in the hovernment and the arts. The author gives a note at the end which summarises what happened to these characters after 1928, providing an interesting glimpse of the varied futures emerging from the maelstrom of 1930s Germany.

In a dozen previous outings we have seen Gunther at a post-war period, albeit frequently dropping back to his past in the pre-war period or more usually during the war itself, where he rubbed shoulders with some top dogs in the Nazi machine while doing what he could to remain at arm’s length. Here he is not exactly green – he has survived the trenches and moved up to the higher echelons of the police department.

Even at a comparatively young age, however, he displays all the sophistication of the world-weary man we see later. Smart, cynical about the motives of most of the people he sees about him, he is quick to recognise and help the powerless, while being ready to use any resources available. Kerr gives you a great detective story set in a cockpit of history.