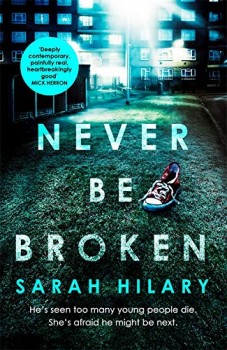 DI Marnie Rome and her sidekick DS Noah Jake are back on the streets of London. Children are dying, victims of gang crime and knife attacks, but public outcry only reaches a crescendo when a 13-year-old white girl from an affluent family living in a smart part of town is killed in an apparently motiveless drive-by shooting. Marnie’s bosses want to see results and they want to see them quickly.

Just when Marnie needs him the most, Noah is struggling with his own problems. In a previous book in the series, he arrested his brother Sol for his own good, but Sol was later killed in a vicious attack in prison, dying with no one beside him to offer comfort. Her son’s death has affected Noah’s mother, sending her into a depressive spiral where all she can do is fill the house with stockpiled items and sit amongst them, mentally out of reach of both her husband and her surviving son.

Sol is never far from Noah’s thoughts, to the extent that his dead brother takes on an almost physical presence, accompanying Noah as he does his job, talking to him, advising, arguing and cajoling. Sol appears and disappears like a character in Randall and Hopkirk (Deceased) only without the white suit. Unless a book is deliberately flirting with the paranormal, such as James Oswald’s recent series opener No Time To Cry, it’s a plot device I’m not usually too keen on, but I’ve always liked Noah as a character, and the psychological elements of the walking, talking dead brother are well handled and it provides an excellent glimpse into Noah’s mental turmoil.

One thing that can always be guaranteed is that Sarah Hilary will do a good job of standing preconceptions on their head and flipping stereotypes so deftly that you’d think she was making a bid for the Olympic gold in gymnastics. Nothing and no one can be taken at face value. Never Be Broken shines a penetrating light into some of London’s dark places, its high-rise blocks and its gang culture. Hilary’s London-based police procedurals always combine character development with immaculate plotting, as well as an often excoriating condemnation of a society that is capable of producing such horror, and she skilfully captures the simmering tensions of Brexit Britain, where nastiness appears to have been validated.

The running sub-plot concerning Marnie’s foster brother Stephen Keele, who brutally murdered Marnie’s parents in a frenzied knife attack, appears to come to an end in this book, and it’s good to see that wrapped up, but equally good is the fact that Hilary doesn’t stoop to any neat and tidy ending, as life simply isn’t like that. Her strength is her ability to write convincingly about abuse at all levels and its effect on both the abused and the abuser.

Her characters do schlep around a fair bit of baggage, and she certainly doesn’t spare the rod, particularly when it comes to Noah, but she always stays on the right side of convincing, and her characters are never in danger of collapsing under the weight of their problems, although it’s a close run thing for Noah in this book. It’s never possible to grab a comfort blanket and pretend nothing nasty will happen as Hilary always has a surprise or two up her sleeve and Never Be Broken is no exception to that rule.