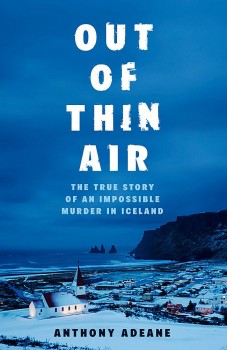 Out of Thin Air: The True Story of an Impossible Murder in Iceland

In January 1974, an 18-year-old boy went to a nightclub in Iceland and disappeared. Ten months later, a 32-year-old man left his home and was never seen again. The two men were unrelated and shared no connections. For a long time, both disappearances were regarded as just that – disappearances. It was assumed that the boy had wandered drunk into the lava fields and fallen into a deep trench, and that the older man had gone on a drinking spree.
Then, a year later, suspects being questioned over a postal fraud suddenly admitted to murdering the boy. Later, they accused four people of murdering the man. These accusations would be proved to be false, and later, the confessions would also be called into question, obtained through duress. This book charts the development of the cases and their impact on Icelandic society.
The most striking aspect of this book is the way it situates the ‘murders’ (there is still no proof their either of the men was murdered) within wider social, geopolitical, and cultural contexts. These details help to explain why Iceland was so shocked by the murders, and why there was pressure that someone, anyone, needed to be brought to justice for them.
The information about Icelandic society and history are so compellingly written that this book could serve as a general guide book for those thinking about visiting Iceland. On the disappearances themselves, the chapter on false confessions skilfully handles a complex topic and demonstrates how and why someone might confess to something they did not do. It also chillingly shows how juries favour confessions over physical evidence.
In terms of style, the book alternates between a present tense retelling of the author’s examination of the disappearances and a past tense relation of the police investigations. This gives it pace and personality. The book is crammed with detail, all of it interesting, but you do need to pay attention. The author has made it easier on the reader by referring to the people involved only by their first names and provides a helpful list of key personnel at the front of the book.
A minor quibble, directed at the publishers not the author, is that a map would have been nice. Overall, this book is intelligently and thoughtfully written, and offers a fresh approach by examining the wider contexts in which the murders occurred and were investigated.