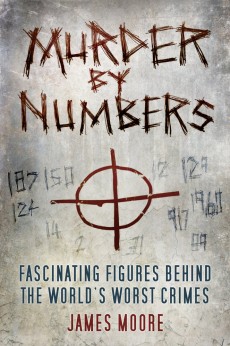 Murder by Numbers: Fascinating Figures Behind the World’s Worst Crimes

How numbers feature in murders, their detection, and the punishment of killers.

As the introduction points out, numbers are integral to any murder investigation. Forensics and ballistics require precise measurements; toxicology reveals levels of poisons in a victim’s body; timings of suspects’ movements might suggest the lack of an alibi. This book examines some of the statistics behind murder, its investigation, and its punishment by considering cases from around the world, and from distant history up until the present day.
Initially I thought this book was going to examine the mysterious synchronicities of numbers associated with murder: victims with the same birthday, for example, or detectives who each owned the same number of dogs. That is not the focus of this book; rather it uses numbers as an organising structure for the material.
Chapter one considers number one by discussing the world’s first murder, suggesting that was Cain’s murder of Abel before moving onto firmer ground by discussing archaeological discoveries of murder in preserved ice bodies, Neanderthal skeletons and in fossil remains over 430,000 years old. Chapter two considers the number two, with an examination of the fate of the two princes in the tower. The book continues in this fashion up to the number one billion (the chances of a false positive identification using DNA).
The book includes some well-known Golden Age murders, more recent infamous cases, and a good selection of less well-documented cases. Though the majority of the material comes from the UK and the US, there are also cases from China, Japan, Europe and Africa.
At times, the link between the murder and numbers seems stretched; for example, the road number where a victim was found or the number of letters in a word. Some of the material, though, is fascinating. Figures detailing hours of CCTV footage viewed, DNA samples taken, and ballistics experiments conducted highlight how painstaking and arduous a murder investigation is.
The statistic that impressed me most was the number of car number plates that were checked during the Yorkshire Ripper investigation (5.2 million). The author has similarly done a detailed job of compiling his material and presenting it in an unusual and thought-provoking way. The inclusion of recent cases and new material keep it fresh, and well-known cases are given an original twist.