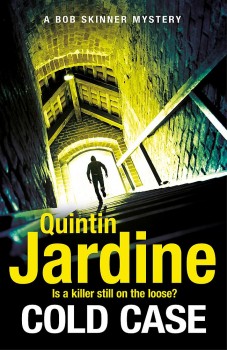 Former top cop Bob Skinner is still kicking his heels in retirement, wondering – a bit like everyone else – whether he should have stayed on in the newly-merged Police Scotland. He keeps himself occupied a couple of days a week on the Saltire newspaper, and occasionally gets called on by the security services when his experience is needed. But beyond that, it’s a case of playing happy families with his wife Sarah, a pathologist in Edinburgh, and his seemingly ever-increasing brood of kids, ranging from daughter Alex, now a criminal defence lawyer, down to Dawn, the youngest, and something of a surprise at only a few months old.

When Skinner gets a call from his old friend, Sir James Proud, known to many as Proud Jimmy, he’s surprised to hear his former colleague and mentor concerned about a case that’s been closed for more than 30 years. An investigative blogger called Austin Brass claims to have information that implicates Proud in the death of a priest, Matthew Ampersand, whose body was found in a water-filled quarry. To Skinner’s surprise, Proud is taking the allegation seriously and wants his old friend’s help in dealing with the accusation. Skinner agrees to looking into Brass’ allegations and see if he can get the man to back off.

Skinner doesn’t expect there to be any substance in the allegations, but the more he looks beneath the surface of the old investigation, the more puzzling irregularities come to light, as well as some unexpected secrets about the man he’s looked up to throughout his police career. Although Skinner starts out wanting to help an old friend, he quickly becomes immersed in the case for its own sake and is determined to uncover the truth, even if it doesn’t paint Proud in a good light. And when Proud Jimmy disappears, leaving behind his elderly wife, who is already showing signs of dementia, Skinner begins to wonder if his friend has been telling the truth …

Cold Case is the 30th book in the Bob Skinner series. I’ve followed his career from the beginning and keep coming back for more, despite the fact that I much preferred the books when he was still a serving police officer. I can’t help feeling that his creator wishes his main character hadn’t been quite so bloody minded about the merger of Scotland’s police forces. Life for Skinner – and Jardine - was a lot easier when he was in one of the top jobs, rather than having to find ever more tenuous ways to place him at the heart of what are essentially police investigations.

I’m also not at all keen on the books in the series written, as Cold Case is, in the first person. For me, they just don’t sound like the authentic voice of the Bob Skinner that I’ve come to know. The narrower focus of the books written from his point of view seem to lack the sprawling reach of the vast cast of coppers and their families that have been built up over the years. For me, Jardine’s writing comes over with greater depth when he’s looking at the characters from the outside rather than internalising everything from Skinner’s point of view. But despite that, he still knows how to tell a good story, and where Bob Skinner is concerned, I just keep coming back for more.