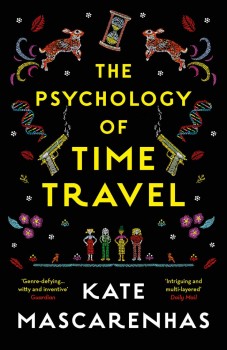 The Psychology of Time Travel

When Odette finds a body, discovering the identity of the woman murdered in impossible circumstances becomes an obsession that will drive her into the clutches of the Conclave.

1967, Cumbria. Margaret, Lucille Grace and Barbara, four young and brilliant scientists, invent a machine that can time travel. At first, the pioneers use rabbits for their trial, but before long, they are time-travelling themselves. On the crest of success, the women invite a television crew in to film their glorious invention. But Barbara has a breakdown on camera and the project teeters on the precipice of disaster.
2017, Dalston. Ruby, Barbara’s granddaughter, sees a newspaper article from the near future about an elderly woman discovered dead in mysterious circumstances. She needs to know if it her grandmother, but time-travel has been a taboo subject in the family since the three other pioneers brushed Barbara under the carpet.
2018, the toy museum. Odette, recently graduated from Cambridge, opens the door to the museum and senses something is wrong. The smell leads her to the basement, where she finds a body behind a locked door. The woman has obviously been murdered, but the killer’s escape seems impossible. The door was locked from the inside.
Whilst the novelty of this book is time-travel, it is a marriage of science-fiction, whodunit and romance. It offers a diverse cast of characters dealing with thought-provoking issues: bullying, sexuality, love, loss, death, mental health issues, aging and the choices we make. The multiple storylines result in a degree of superficiality in certain areas. And the large cast of characters plus the multiple timelines make this book confusing in places. The ending simply fizzles out, and the last pages are a gimmick.
I appreciate the questions the story raises (evident from the title) about how time-travel affects a person’s attitudes to living in the present, relationships, views on death, and knowing about their future. Unfortunately the author has packed so many topics into an irking non-linear narrative that each question, theme and aspect is shallow.
This includes the characters, of which there are six main ones. The story that everything rides on introduces four core players and relates the whole incident in a matter of pages, before leaping ahead many years. Take away the time-travel aspect and the four pioneers are redolent of a group of teenage girls, with a bully as their leader. They are stereotypical, and despite the issues their characters raise, their development arcs are predictable.

The distinct eras (1967, 2017, 2018) are vague, confusing and estrange the reader from the text. The laws, with scant explanation despite a bit of scientific jargon, are counter to most well-established science fiction tropes, though this is an argument beyond my expertise. The introduction of the far future is disappointing and underdeveloped; as this is fiction, I expect imagination, not a sense of obligation for its inclusion. If it is not convincing and meaty, don’t write it.

Though the dialogue and descriptive writing is almost old-fashioned and Enid Blyton-esque, this debut author shows potential. Hopefully future novels will concentrate more on character depth and development.