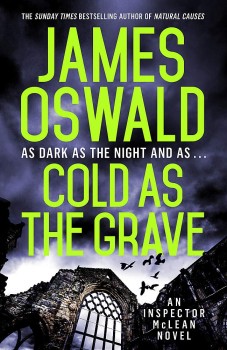 Much to my relief, James Oswald’s foray into a new series character, London-based DC Constance Fairchild, doesn’t mean that he’s abandoned Edinburgh copper Tony McLean. Cold as the Grave whisked me north of the border again for another excellent Scottish police procedural, with added intrigue that ably skates the fine line between crime and something wilder and darker.

When the mummified body of a child is found in the neglected basement of an Edinburgh property, Tony McLean and everyone else thinks that the child has been dead for years. McLean only happened on the scene by accident as he was meant to be part of an undercover operation to catch some unpleasant activists in a demonstration on Royal Mile. McLean, newly-promoted to the rank of DCI, has a marked aversion to office work, and is much happier getting stuck into an investigation, especially when the case of the dead child turns out not to be as cold as they’d originally believed.

McLean’s life becomes more complicated when other bodies turn up in a similar state of desiccation. His enquiries, fueled by a visit from a man who’s trying to help one of his co-workers whose child has gone missing, put him in conflict with the powers that be above him, and lead him into the world of Scotland’s numerous powerless, terrified migrant workers, in many cases brought here illegally, who will do anything to stay out of the notice of anyone in authority, even staying silent when their children are taken and killed.

Cold as the Grave brings back McLean’s nemesis, the rich and well-connected Mrs Saifre, otherwise known as Jane Louise Dee. McLean is put under strict orders to attend a glitzy charity event she’s organising. McLean would sooner eat hot coals than spend any time in her company, but his girlfriend Emma, who is still grieving for the baby she lost to a late miscarriage, wants to dress up and have some fun for a change. Mrs Saifre is as chilling as ever, even with her powers veiled and it comes as no surprise when McLean receives a warning from a medium at a visiting circus that an old evil is stalking Edinburgh’s streets and preying on the vulnerable.

McLean, despite his previous brushes with things that have go bump – very heavily - in the night, is sceptical of the talk of djinns, and no one would blame him for that, but he still pockets the small charm of a genie-style lamp that he’s given. He’s always believed in taking whatever help is on offer, even from unlikely sources.

Series regulars the flamboyant transsexual Madame Rose and the ever-disdainful Mrs McCutcheon’s Cat, and McLean’s aptly-named colleague Grumpy Bob make an appearance, with Madame Rose playing a satisfactorily large part in helping things along. Oswald successfully introduces an element of what my co-editor likes to call to woo-woo into each book. I sometimes wonder what anyone expecting a straightforward Scottish cop procedural makes of all this, but for me it’s always the highlight of the books and Cold as the Grave is an excellent addition to a strong series.