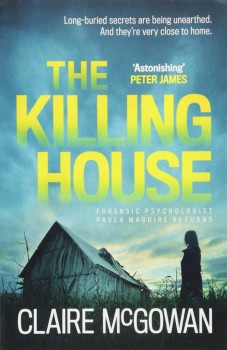 When a puzzling missing persons case, possibly connected to her own past, opens up in her home town, forensic psychologist Paula Maguire can’t help but return.

Claire McGowan, an honest, bravest and convincing, chronicler in novel form of the Northern Ireland Troubles and their aftermath, finally wraps up her brilliant series featuring forensic psychologist Paula Maguire and her 30-year search to discover the fate of her mother. This powerful and disturbing sixth and final story is in my opinion the best of all and a fitting finale to the conflicted, error-prone Paula’s search for the truth.

Paula is back in the border town of Ballyterrin, on leave from her London home and job for the wedding of two former PSNI colleagues, and cannot resist an invitation to help with an investigation into the discovery of two bodies at an abandoned farm. One is that of a man known to be an IRA member and missing since 1993 when Paula was just a teenager. The other is a young girl whose identity remains a mystery. As Paula attempts to discover who the girl is and why no one is looking for her, an anonymous tip-off claims her mother, who has not been seen since the same year, was kidnapped and executed as a traitor by the IRA and is also buried on the farm.

When another girl is kidnapped, Paula sets out to find those responsible. The more she digs, the more it becomes clear there are explosive secrets still to surface that could strike at the heart of everything she holds.

Paula’s story, which undoubtedly mirrors, at least in part, that of others who lived through this time of suspicion and death, is brilliantly depicted in a haunting and atmospheric setting.
As in previous episodes her determination to understand the past is related alongside her work in the present. Here McGowan uses the simple, but effective, device of a second character – a woman held by an IRA punishment team determined to find a possible ‘tout’ in their midst who is betraying them to British Army intelligence.

Caught up in all this are Paula’s father, a former tough and unbending RUC officer, rebuilding his life as a husband and grandfather after what he believes to be her mother’s death; his former police partner; her own one-time partner Aiden, who saw his own father murdered and is now in prison for taking his revenge; and her childhood friends and former colleagues.

Their stories serve to underline what life in the border counties was like and how many of the problems continue. Tense and, at times, quite harrowing, it offers a plain, yet insightful depiction of the Troubles and their legacy and the current delicately poised peace against a background in which revenge killings still happen and people still disappear.

McGowan’s examination of how political policy, with its compromises in the pursuit of that peace, has affected policing in Northern Ireland is especially fascinating, made all the more real and shocking because of her ability to invest reader interest in Paula’s happiness and safety.

Crimes committed many years ago are put into the context of how the victims and their families, and of course the police, try to bring comfort, without any firm expectation that those who killed will ever face trial.

But Paula’s young daughter, the product of a brief affair, represents hope, despite the problems standing in the way. That sense is echoed by McGowan’s brilliant characterisations. Despite some grim characters, the basic goodness of others – even those who may have done wrong in the past – enables the reader to differentiate between those caught up in the times and those who enjoyed their part of it, truly history at a personal level.

It is all held together by Paula, a brave, if conflicted protagonist. She has made mistakes in her personal and professional lives, but always tries to put them right and she loves and loses along the way. McGowan has brought her to life in a way that drags the reader in and makes them care. This meticulously plotted and often action-filled and fast-moving series has never been an especially easy read, but has always been rewarding as well as compelling.