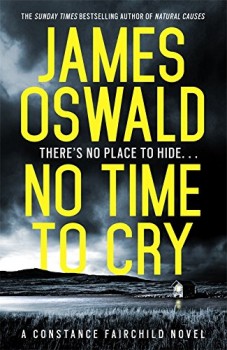 DC Constance Fairchild is an undercover cop with the Met. Her unit is looking at organised crime and have clearly rattled a few cages. Constance finds her boss DI Pete Copperthwaite tortured and shot in the head and soon after, there’s an attempt on her life. The word on the streets is that there’s a contract out on Constance. But all the assassin succeeded in doing was injuring a cat that had been sleeping in her bed, so Constance isn’t convinced that the price on her head is that high.

Although officially she’s suspended pending an investigation by Professional Standards into her boss’s murder, Constance does some moonlighting on a personal matter, helping an old friend whose younger sister Izzy has gone missing. The investigation brings Constance into conflict with the girl’s father, who is determined to downplay his daughter’s disappearance, despite the fact that she’s only 16.

Constance’s enquiries take her back to the village where she was brought up and the family she’s not seen for several years. The only member of the family she’s happy to spend any time with is her aunt, who offers a much-needed refuge. But trouble follows closely behind, and Constance is kidnapped and threatened by Izzy’s father, who doesn’t want any outside interference in what he sees as his own business. But Constance isn’t easily intimidated. She wants to find Izzy, and she wants to find Pete Copperthwaite’s killers.

James Oswald has taken a break from Scottish cop DI Tony McLean to introduce a new series protagonist – and Constance Fairchild hits the ground running. She’s tough, determined and resourceful. And likeable, which is often an unexpected bonus with a main character in crime fiction. Naturally she’s carrying some baggage, in this case a privileged upbringing, with pots of old money sloshing around, and parents who don’t think the police is a suitable career for a daughter they would like to see married off to some chinless wonder, titled, preferably.

There’s a faint whiff of the supernatural, and on this occasion I’m not sure that it actually adds much to the story, serving more as a device to discuss the plot than to actually further the story, but I do like a bit of light woo-woo so I’m prepared to dial back judgment until I see whether it will become a feature of the series. In the same vein, I’m not sure what plot points were served by either the cat or a brief appearance by the cross-dressing medium Madame Rose, but I did like the link she provided to the DI McLean series and it trailed the intriguing possibility of Oswald’s two main series characters meeting up at some point in the future. That would certainly get my vote.

No Time to Cry launches Constance Fairchild with style and confidence. The plot was complex but not impenetrable and seeing Constance go up against a superior force and hold her own was very satisfying. Oswald has switched to a female main character with aplomb and has made Constance into a protagonist well worth following and while I hope this switch doesn’t mean the end of DI McLean and that other feline, Mrs McCutcheon’s Cat, I’m also a convert to this new series