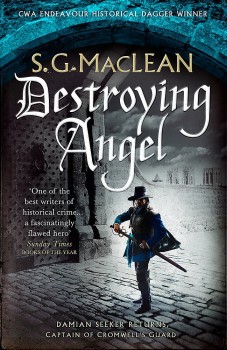 1655. Captain Damian Seeker of Oliver Cromwell’s handpicked guard has been sent north to prepare the way for stringent new anti-Royalist laws. What should be a routine visit to a village on the North York moors uncovers a stew of hatred, ambition and treachery.

Damian Seeker, captain of Oliver Cromwell’s handpicked guard, soldier, spy, enforcer and, when need arises, executioner, who reports only to the Lord Protector and his spymaster John Thurloe, is back in the third of the suspenseful, atmospheric additions to one of the best historical crime series.

SG MacLean gambled when she allowed Seeker to kill off her previous protagonist, the fiery Scot Alexander Seaton, assassin and plotter in the cause of the deposed Stuart kings. But her reward came in the form of a CWA Historical Dagger for his debut and comparison with masters of the genre like CJ Sansom and Rory Clements.

Seeker is a man without a past. No one knows his real name or background. He is a big, tough Yorkshireman, utterly loyal to Cromwell and ruthless in pursuit of enemies of the Commonwealth. This Cromwellian ‘Man With No Name’, who stops conversation when he enters an inn, is avoided and feared by ordinary people as he rides past on his great horse, but is a hard man with a softer core.

Occasionally, MacLean allows the mask to slip and this time readers are treated to a glimpse of the man, husband and father he might have been had his hidden past been different.  Seeker has been sent north to prepare the way for stringent new anti-Royalist laws under the rule of the major-generals, Parliament’s latest attempt to supress sedition and impose strict Protestantism on a partly unwilling population.

In a small village on the North York moors, he uncovers a stew of grudges and resentment, a local constable using his position to avenge imagined slurs, a hated lord of the manor – last of a staunchly Royalist family who just manages to avoid suspicion of treachery – and a vicar on trial accused of un-Godly acts.

As a guest of the Commissioner – the Puritans were strong on local authority – a man from a proud Leveller family disillusioned with Cromwell’s government, respected and despised in equal measure locally, who Seeker has encountered before, he must attend a dinner for the Trier – successor to the dreaded Witchfinders – and responsible for judging those believed to have fallen short in faith or morality.

The Trier and his wife fail to appear, but a young girl who lives with the family is fatally poisoned. Seeker must find the motive – bad luck, petty revenge, or maybe part of a larger plot against Cromwell’s government in the north. At the same time he must deal with the unexpected re-emergence of the most painful part of his own past.

The Commonwealth, sandwiched between the Civil War and execution of Charles I and the Restoration, is a period largely ignored by fiction writers, but which offers rich pickings for a brave and determined author.

MacLean is just that. Her stories do not judge between Royalists and Puritans and she effortlessly achieves the delicate balance of immersing readers in a time and place rife with deception and precarious loyalties without ever swamping them in research, while the powerful and atmospheric central mystery is satisfying and plausible.

Part of the fascination comes from the struggle Seeker himself has between upholding the Protectorate and its harsh values and his own inherent compassion and decency. Different elements are cleverly melded, with MacLean’s depiction of the paranoia and fear caused by the Trier and his court particularly chilling and believable, as well as her talent for character development that makes the enigmatic Seeker such a compelling protagonist.

This convoluted, fascinating and sometimes brutal story could be a standalone, but I suggest readers go back to the beginning with The Seeker to get the full impact of a series that’s crying out for an ambitious TV or film director to turn him into a Cromwellian Bond!