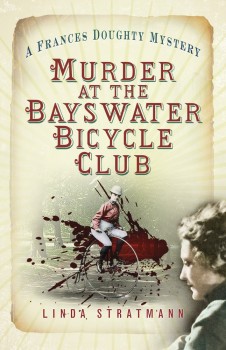 Murder at the Bayswater Bicycle Club

Frances Doughty is asked by a mysterious government agency to keep an eye on goings-on at a posh West London cycle club and enters a world of corruption, murder, espionage and personal danger.

Linda Stratmann was a prolific true crime author before moving to fiction with her pair of Victorian female detectives Frances Doughty and Mina Scarletti. And if this convoluted eighth story involving gambling, sport, violent crime, family secrets and espionage is to be the buttoned-up Doughty’s last, she will certainly go out in style.

Stratmann’s style is like her heroines, laid-back almost to the point of becoming cosy, a cross between Arthur Conan Doyle and Jane Austen. But despite this she is surprisingly modern in her plotting and sharp and observant in her humour.

Fixed professional cycle racing, proto-feminism, industrial and possibly international espionage hardly seem likely among the wealthy upper-class young men of the Bayswater Bicycle Club at the turn of the 1880s.

And is it entirely coincidence that so many of these self-satisfied twits, convinced of their moral superiority and careless of those they consider beneath them, share the initials of their association with the national broadcaster where many similar mindsets exist today?

Doughty goes undercover for a mysterious government agency to investigate some disturbing information regarding the apparently innocuous club and is soon plunged into a murky world of secrets, a suspicious disappearance and a brutal murder. Like the earlier stories, the convoluted plot unravels slowly, but the pace seems hardly important with vivid details and accurate period dialogue embedding the reader firmly in the often murky Victorian London of 1882.

Once again, a meticulously researched, but low-key story has moments of real suspense. What seems a cast of thousands – many making their return from previous adventures –  frequently demand a serious effort on behalf of the reader to keep track of progress, but that is part of its charm.

Returnees include the massively impressive and commonsense Sarah, Doughty’s friend and assistant, who when not sorting out abusive or recalcitrant husbands, continues her courtship of the equally massive bodybuilder and pugilist Professor Pounder; West London’s equivalent of the Baker Street Irregulars led by Tom Smith and Ratty; the plodding, disapproving Inspector Sharrock, and Doughty’s devoted homosexual friend Cedric Garton.
All provide distractions from the main plot, but it is the character of Frances herself which carries a story which many will find all the better for not being sensationalised.

To call her buttoned-up is an understatement. She’s constantly trying to prove herself to an at best condescending male world, while hiding her own insecurities, and her constant reserve illustrates the difficulties of life for a woman trying to make a living in late Victorian times. Her preoccupation with the mysterious author Mr Grove, who has turned her adventures into bestsellers under the guise of Miss Dauntless and also intervened at crucial moments in the past, is rekindled.

There are dead ends, twists and turns in plenty and although the denouement is somewhat tidily convenient, there is one more twist to come to round off the story ­– and perhaps Doughty’s career as west London’s finest female detective.