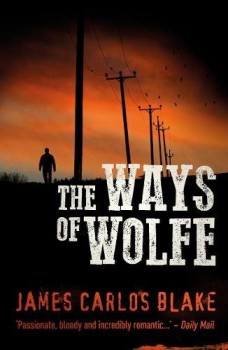 The Ways of Wolfe

Axel Wolfe’s first attempt at robbery does not go well and he ends up doing a long stretch at a Texas state prison, feeling sore about the partner who left him behind.

Axel Wolfe is one of the family whose exploits on the Texas/Mexico border have been detailed in several books by James Carlos Blake. In accordance with tradition, members seeking to join the shady side of the family business are obliged to get a college degree first, and Axel complies. But he is drawn to the dark side, and when his friend Billy offers a place in a three-man robbery team he doesn’t have to be asked twice.

The robbery goes without a hitch, but an unfortunate minor automobile collision draws police attention and during the attempt to flee Axel takes a police bullet. When Billy turns his back Axel is left as the sole person in custody, gets framed for another robbery entirely and when he refuses to name his confederates, is sentenced to 30 years in the State Pen.

By 2008, Axel has been inside for 24 years and is determined to see out his term quietly and then get together with his daughter, the only member of his own family still around since his wife ran off when he was incarcerated. But a young Mexican, Cacho, arrives at the prison and picks Axel’s brains about routines, eventually devising a plan for escape using outside help. Axel is persuaded to take part.

Against all the odds, and at terrible risks, Axel and Cacho eventually make it to Mexico, and thanks to assistance from Cacho’s brother can contemplate a new life.
Inside, Axel had put Billy out of his mind to avoid being eaten up by hatred, but now he is out, the thought of Billy out there enjoying the fruits of a robbery for which Axel paid such a high price is hard to forget. The scene is set for a showdown.

It’s a tribute to Blake’s writing that the macho style depicted feels so natural, and Axel’s high-risk lurch into crime feels less like lunacy and more like a free-spirited lifestyle choice. It is all one with a disregard for the law and habituation to violence and casual death which seems to be par for the course on the Mexican border.

It does, however, make for stirring reading, and the prison break during a rare torrential downpour over the Rio Grande is as exciting as anything I’ve read recently. The protagonists being tight-lipped cowboys prevents too much by way of dialogue, but what’s there is spare, and even the narrative is tight, told in the present tense.

Blake’s tales smack of the Wild West with a modern twist, a place where men have to do what they have to do and don’t bewail their luck when stuck in the pen for an undeserved 30 years.