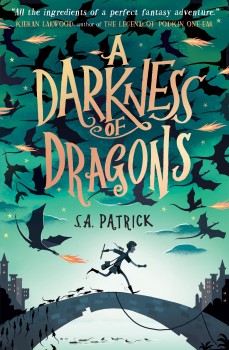 A Darkness of Dragons

The children of Hamelyn have never been found, but at least the man responsible for their disappearance is safely under lock and key. Until the dragons decide to take their revenge …

With missing kids abounding in contemporary crime fiction, A Darkness of Dragons is a timely reminder that kids have been going missing in stories for a very long time, and one of the most celebrated mass child kidnappings of all time took place in the sleepy little town of Hamelin when a disgruntled pest controller, called in to rid the town of its rat infestation, waltzed off with its children after a row about his bill, leaving only one behind.

SA Patrick puts a very different spin on a traditional folk tale by the introduction of dragons. Yes, I did say dragons. And trust me, it works quite brilliantly. The dragons were just as much the victims of the evil Piper as the folks of Hamelyn (as the book spells it), and they still have old scores to settle …

Patch Brightwater, a former trainee piper in the city of Tiviscan, isn’t happy with the future the Pipers’ Council has mapped put for him, and so runs away. He makes his way through deep snow to the isolated village of Patterfall, barely alive. To help repay their kindness, he offers to rid them of their rat problem, but piping rats rarely ends well, and when Patch finds himself dealing with Wren, a girl who’s been cursed into the form of a rat, he wonders if his life could get any stranger. And then he meets Barver, a sarcastic dracogriff – a cross between a dragon and a griffin.

The evil Piper has been in prison for years, but when the dragons decide to take their revenge on the man who stole their children, Patch, Wren and Barver must team up to prevent catastrophe overtaking both humans and dragons as well as trying to get Wren restored to her true form. But nothing is ever simple where evil Pipers are concerned – or dragons.

A Darkness of Dragons is an inspired take on an old story, with engaging characters, a really good story and several unexpected twists. Patrick weaves his story as hauntingly as the perfect notes issuing from Patch’s pipe. Music is an integral part of the plot and that positively leaps off the page as in the midst of a battle, the massed Pipers play their part by playing their battle music. Music can sustain and inspire, but in this world it can also kill.

I loved the story and I loved the characters. Wren is sparky, Barver is an absolute delight, and Patch is the glue that holds the trio together. There are multiple layers to what at first seems a simple quest narrative, but then darker notes sound and nothing is ever quite what it seems. Patrick crafts a story that will delight and amuse, but which is also capable of throwing in a chill as cold and deep as the snow that almost kills Patch at the outset of the story.

Set some time aside, curl up and allow yourself to read A Darkness of Dragons from cover to cover in one sitting. This is writing for younger children – as well as teens and adults – at its best. And it’s certainly the most original take I’ve read for ages on what’s become an overly well-worn genre plot device. If in doubt, chuck dragons into the mix. I wouldn’t mind some in the next round of domestic noir I pick up …