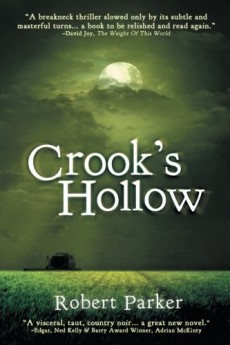 Someone wants Thor Loxley dead. But he doesn’t know who, or why.

Thor Loxley works in a pub in the village of Crook’s Hollow, midway between Manchester and Liverpool. He’s estranged from his family who’ve farmed a large area of land in the village for generations, but other than that, Thor lives an uneventful life. And he doesn’t think his family want him dead. But someone does.

The book opens with a dramatic scene where Thor is fighting for his life against a masked opponent who’s determined to inflict death by combine harvester on the frantic young man. Thor escapes by the skin of his teeth, with the cryptic words ‘you should have got on with it’ ringing in his ears. The only problem is that Thor has no idea what it is he should have got on with.

Crook’s Hollow presents a very unidyllic view of the English countryside and although the village and its surroundings are imaginary, they feel firmly rooted in the landscape and have a strong sense of place, true to the north of England in the no man’s land between two large cities where the urban sprawl peters out into green fields and village feuds.

The Loxleys and the Crooks have been rivals for generations. The exact cause of the dislike and distrust may have been lost but the hatred between the two families is still raw and bitter. There’s something of a Montague and Capulet vibe here as Thor and Roisin Crook try to hide their relationship from their families, knowing they would face opposition from all sides.

As Thor tries to discover who wants him dead, land developers are doing their best to move into the village, presenting a scheme to build thousands of houses on land nearby. But the success of the scheme depends on them securing a particular piece of land.

The climax comes in the midst of a raging storm, with floodwaters tearing through the village, adding to the tense, dark atmosphere woven around the hatred between the Loxleys and the Crooks. The two warring families are well-depicted, with very few sympathetic characters emerging from the ever-deteriorating situation, and Parker manages to keep his people just on the right side of believable, without descending into caricature. I could have done without the unexpected dead dog, but then I’m fussy where animals in crime fiction are concerned.

Crook’s Hollow presents a convincing picture of the sort of rivalry that can tear families apart, and Parker’s take on rapacious developers was at times all too convincing, although there were some legal aspects that I found slightly harder to follow after spending a large amount of my working life dealing with land development. But there are times when facts shouldn’t stand in the way of a good story – and Parker certainly tells a good story.