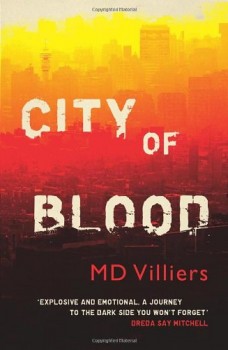 When Siphiwe goes to help a stabbing victim he becomes involved with two violent gangs, both of which will kill him for the information he has.

Siphiwe Modise is a 19-year-old boy, traumatised by the mob killing of his brother after a botched robbery and now living in a charitable shelter in Johannesburg. One day on the street he sees a woman stabbed by a Nigerian and, alone of the onlookers, goes to her aid.

The woman recovers and asks Siphiwe to help her locate her son, Lucky, who is in hiding after stealing from a Nigerian gang. Siphiwe finds him and becomes his friend, but this brings him to the attention of both the Nigerians, who have noted his contact with Lucky’s mother, and a local gang who see the Nigerians as interlopers and seek information to find their leader’s base. Both gangs are entirely ruthless and have little respect for the police, who also want Siphiwe’s help. Caught in the middle, Siphiwe needs to be clever, and very careful.

CITY OF BLOOD is essentially Siphiwe’s story, told in the first person, with intervening sections told in the third person when action takes place out of his sight. This arrangement works fine, but places the burden of credibility firmly on Siphiwe’s shoulders. By and large he stands up to the test, although at times he seems a little too wise given his age and the pressures he is under. He is certainly a sympathetic protagonist.

The police role in events is shown from the perspective of a young white inspector, Adrian, also sympathetic. The latter’s fiery temper gives depth to the character although it is difficult to see this as being consistent with a police career.

It seems that the book fairly represents the current situation in Johannesburg as far as crime is concerned, which is not a happy one: a society where criminal gangs dynamite ATMs and then lie in wait armed with AK47 assault rifles for the police response. As always when law and order is in breakdown, it is the less well-off who suffer the greatest burden, and Siphiwe and the people with whom he lives have little security to speak of. Their hope is not to come to the notice of the criminals in their midst; bearing witness to illegal activity means signing your own death warrant.

A city where institutional control over crime is overwhelmed certainly provides a dramatic background for a novel, and CITY OF BLOOD illustrates how in such circumstances those who have drive and a lack of moral scruples can quickly rise to power. Villiers allows the conflict of a relatively powerless young protagonist with these forces to drive the story forward, eschewing the temptation to over-dramatise for a more dispassionate style, and the book is all the better for it.