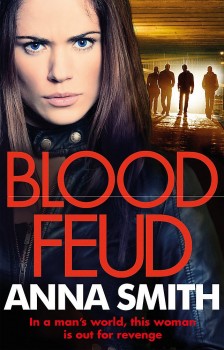 Corporate lawyer Kerry Casey is pitchforked into taking over her father’s gangland empire when her brother is assassinated, and then her mother killed at his funeral.

Police Scotland is in a shambles. Senior officers have been forced to resign under investigation for illegal data gathering about colleagues and investigative journalists. Glasgow, which has never quite managed to shrug off the legacy of its 1930s razor gangs, has slid backwards into gang warfare. At stake is control of the multi-million drugs trade and the laundering of the huge profits through brothels, street prostitution, saunas, nail bars, bookmakers and clubs.

Two family gangs, the Lyons and the Daniels, control the city’s heroin and cocaine market. In the past couple of years, there have been daylight shootings outside primary schools and the driver of a car was shot dead as he waited at lights.

The leadership and organisation of these family ‘firms’ far outstrips anything the forces of law and order can put against it. In a spectacular daylight hit, Kevin ‘Gerbil’ Carroll, a brutal enforcer for the Daniels, whose favoured methods were power-tools and blow-torches, was executed by two gunmen as he sat in his car.

The crime gangs’ main centres of operation are among the UK’s most disadvantaged communities. Maryhill, Possilpark, Milton, Springburn and Barlanark form a belt of deprivation across the north of Glasgow. They are also the main recruiting areas where the gangs offer leadership, a sense of purpose, affluence and status in exchange for loyalty. Generations of younger men, with no future other than unemployment, have seized that chance.

This is the factual background which the brave and brilliant former Glasgow Daily Record chief reporter Anna Smith, who covered conflicts in Somalia, Rwanda and Kosovo, reporting on plight of the refugees, genocide and ethnic cleansing, and at home worked on major investigations, unmasking drug dealers and paedophiles, has chosen for her new heroine, one-time corporate lawyer Kerry Casey.

Casey is Glasgow-Irish, the daughter of an old-style gang boss who specialised in ‘proper’ crime – safe blowing and robberies. On his death, her greedy and ambitious brother moved the ‘firm’ into the lucrative drugs trade. He’s out of his depth dealing with powerful English and Spanish syndicates and pays the price for his abrasive attitude when he is gunned down.

Casey, sent away by her mother as a teenager, returns for the funeral, but when that is shockingly interrupted by gunmen and her mother killed in the crossfire, she sees no choice but to take the reins of the business and seek revenge. What she doesn’t realise is how much of her father’s daughter she is, and just how good at it she will be, applying her legal detachment to volatile and violent situations! She not only has to deal with other ganglords bidding to take over the family’s ‘turf’, but also betrayal inside her own organisation.

It’s fast, it’s furious, it’s brutal. But given the facts on which it is based, is hardly far-fetched, although the body count is perhaps a little on the high side.

Casey is certainly a believable character and with plenty of interesting twists and turns and some powerful support, this looks like the start of a longer series. Certainly her verbal clash near the book’s close with a brutal Colombian drug lord holds plenty of promise for further violent action.

Strong women are nothing new in fiction. Smith’s successful series involving crime reporter Rosie Gilmour is a classic example. But this time she also introduces Sharon, the former mistress of a particularly evil English gang boss, discarded and marked for elimination as her looks fade, who manages to escape and now looks set to join Casey as a partner. It will be interesting to see how the relationship develops between the cool, educated legal brain and the street-smart, determined, stop at nothing, woman from the heart of the underworld develops as Casey seeks to fulfil her father’s dream and make his businesses totally legitimate.

Smith never disappoints. She’s as good as any modern writer of crime/action fiction  –  and better than 99 per cent because she knows her subject inside out and depicts it in stark, journalistic terms. The diamond-cut Kerry Casey can only add to her reputation.