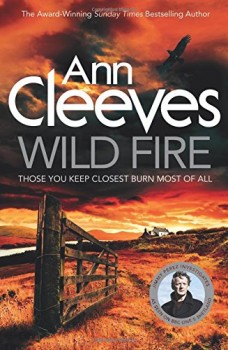 When the local doctor's nanny is found strung up, murdered, in the barn of an architect who only moved to Shetland recently, the question arises whether the crime could have anything to do with the suicide of the man who used to own the house.

Jimmy Perez, in his final outing as Ann Cleeves' detective, has his work cut out to solve this crime. There are one, two, three families with secrets, histories and dysfunction.

Daniel Fleming, the architect, and his designer wife Helena, have two children: wee Ellie and young autistic Christopher. The local people view the family from London with suspicion after Christopher set fire to a bin at school.

Emma, the dead nanny, worked for the Moncrieffs – Robert, a local GP, and his PR wife Belle. Their four children are now without a nanny, but the Moncrieffs seem more troubled by how they will cope than by the death of Emma who had lived with them for years.

There’s also the question of what Magnie, Emma's boyfriend and his busybody mother, have to do with it all.

Ann Cleeves’ final Shetland novel is a masterpiece of tangled family threads and crime smoke and mirrors. The rural setting, with its fishbowl community life, is a perfect place to demonstrate how nobody knows much about anyone at all, not even within their own families.

And it's not just the families connected to the first crime that have their dramas uncovered. The arrival of Willow, the Senior Investigation Officer from Inverness, brings her own drama to Jimmy Perez's life. And Sandy, Perez's sidekick, also has his own relationship preoccupation to add to the mix.

The whole novel is a page-turner, each scene bringing more information to the table, more connections, more threads that lead you in so many directions you just want to get to the end and find out what on earth happened at Deltaness, and, of course, also uncover why the second crime occurred.

Cleeves does a fine job of showcasing the Shetland landscape, mixing real locations with slightly more fictional ones. Whether it's taking photos of otters, or stopping off at Frankie's for fish and chips, the islands feel very real without distracting from the story.

For anyone who's seen the TV series Shetland, the books spend less time with Jimmy and more with each of the characters, points of view flitting between them like dramatic butterflies, sharing their thoughts and feelings. And you still can't figure out who did it. Jimmy seems less central for other reasons, too. Willow and Sandy share much of the investigating, and that's fine. Police work is family too ...

The team finally figure out what's happening, but it's one of the children that forces a finale-worthy action scene to reveal the killer. And it all makes sense in the end in a tragic, understandable kind of way.

Wild Fire is a terrifically readable and satisfying crime novel. All that's left for Cleeves to do is give Perez the ending he deserves, too. And she does.