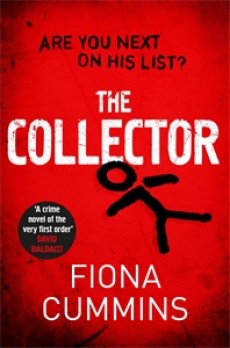 The Bone Collector is a disturbed and sinister figure who abducted people with bone deformities to strip and display their skeletons. He had been caught by the police but escaped and now his earlier victims, together with new specimens, are at serious risk.

DS Etta Fitzroy has not recovered from the escape of the evil Bone Collector, a story that started in Fiona Cummins impressive debut Rattle. She is particularly haunted by the fate of five-year-old Clara, whose body has never been found and whose parents cling on to hope that she will yet be found. Jakey Frith, who had been rescued from the clutches of the monstrous collector, lives with his father and mother in a state of fear.

Meanwhile, the escaped killer has assumed the identity of Mr Silver. He seeks to engage a young man called Saul, who lives in a very dysfunctional family. He sees him as a possible apprentice, the son he never had. He seeks to embroil him in his murderous plans.

Clara lies in a caravan, alone and scared. A young woman with a deformed face becomes enamoured of the seductive Mr Silver, unaware of the fate that is in store for her. Jakey has a plan. He wants to be the bait in a trap to catch the Bone Collector. Etta, now working with a new partner, seeks to find her nemesis before he can cause further harm.

The Collector is well plotted and the characters are as engaging as in Rattle. At the start of the book I found the style a little disjointed and it was only as my familiarity with the main protagonists returned that I felt that the story gained flow and pace. The exploration of the history and psyche of Mr Silver is handled with tact and I was almost left feeling sympathy for this monster. Almost, but not quite.

As the book reaches the last quarter the pace becomes inescapable and highly cinematic. It is impossible to know who will survive and who will die, and who will be caught and who will escape. The options are carefully set up and their trajectory to the conclusion is handled in a highly satisfactory manner.