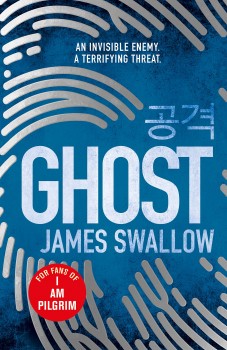 Marc Dane and his partner, ex-Delta Force sniper Lucy Keyes, must call on all their skills to track down a worldwide series of devastating cyber-attacks.

The third book in the Marc Dane series, like its predecessors Nomad and Exile, is another fast-paced, action-packed thriller full of technology and tension. It’s also extremely timely, released after a winter series of cyber-attacks disrupted infrastructure world-wide and tensions in the Korean peninsula mounted as Donald Trump and Kim Jong-Un exchanged threats.

This time Dane and his colleague in Rubicon’s covert strike force, former Delta Force sniper Lucy Keyes, face a threat from a ruthless cyber-terrorist fuelled by revenge, employed by the Combine, an even more shadowy group of the rich and powerful and using the dark web in an alliance of convenience with the brutal intelligence service of the North Korean dictator to destabilise the fragile peace.

Veteran scriptwriter James Swallow shows all his skills in this relentlessly paced story which reads as if it is written for the screen as a 21st century successor to Bond or Bourne. Even a mass of technical jargon and the occasional coding chatter between hackers, so vital to carry the theme, is never allowed to detract from the narrative.

Dane and Keyes face betrayal within and an endless series of physical threats as they pursue a faceless terrorist known only as Madrigal across a digital battlefield and four continents.
From a grim opening assassination scene in Malta’s medieval and baroque ‘Silent City’, the 4,000-year-old walled town of Mdina, once home to St Paul and the island’s Norman, Sicilian and Spanish overlords, they chase their virtual opponents who are prepared to kill any number of innocent people to achieve their objectives.

Dane is no square-jawed super hero. A former Navy technician, helicopter pilot and MI6 officer, he’s a quick-thinker and mentally and physically skilled to adapt quickly to any situation. But he’s motivated by personal revenge for the death of his love and the members of his former unit at the hands of the Combine, and is also prone to rashness and there are plenty of areas where others have greater expertise, all which makes him seem much more realistic.

The tough guy role in these stories goes to Lucy, provided you can accept her role as a female sniper in America’s elite – and allegedly all-male – Delta Force. She’s a steely professional with a kick-ass attitude to life in general.

From its frenetic and bloody start, the story jumps from one action sequence to another before building to a stunning and totally cinematic climax. It’s pure escapism, strongly focussing on character and motivations, but while some readers may think it OTT in terms of the international threat level, Swallow manages to keep just to the right side of believable, with its all too plausible technology reflecting very real threats to the modern world.

Unfortunately, as in both his earlier books, a story that must have involved extensive research is spoiled by the occasional – and quite basic – errors. This time he suggests avgas, used only in piston-engined aircraft, as distinct from kerosene-based fuel, is used in the giant Russian-built Antonov jet freighters. He also seems to have some trouble over the application of power to the propulsion system of helicopters – an unfortunate error with Dane cast as a qualified chopper pilot!

But most readers, even if they notice these blips, will happily pass them by as Dane and Lucy overcome one crisis after another in what is a superbly written, rip-roaring, high-tech, action adventure thriller.