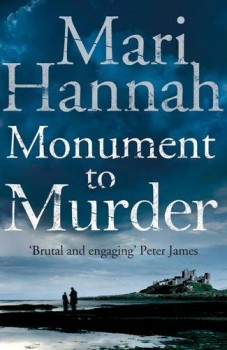 DCI Kate Daniels returns for a fourth time in Monument to Murder, set once again in the starkly beautiful county of Northumberland, an area where I’ve spent many happy holidays walking over upland moors or taking in the wide views from gloriously empty beaches. Spotting places you know always adds an extra dimension to a book, and I felt particularly at home in this one right from the start as I curled up on the sofa and settled in for a lovely long read.

Mari Hannah’s series has always been worth reading, but in the book she really hits her stride. Daniels is called out to a crime scene amongst sand dunes near Bamburgh Castle, where a collapse has revealed two sets of skeletal remains. A forensic anthropologist confirms that the bodies are those of a young woman and a child, buried at different times, leaving Daniels with a very cold case on her hands.

At the same time, Daniel’s friend, newly-widowed Emily McCann, is struggling to come to terms with her grief, but is equally determined to return to her work as a prison psychologist. One of the inmates she has to deal with is sex offender, Walter Fearon, due for release in a matter of days, even though every one who knows him is certain that he’ll re-offend almost immediately. Fearon likes playing mind-games, and he’s developed an unhealthy obsession with Emily, which becomes infinitely worse for her when Fearon extends his sick fantasies to encompass her teenage daughter.

In a masterly stroke, Hannah manages to make the two seemingly separate but increasingly convergent storylines equally compelling, and for once I didn’t resent the shifts in focus that came with each new chapter. I was settled in for the afternoon with a good book, happily immersed in the winning combination of immaculate description and engaging characterisation that stands out in each of the books. Daniels is still suffering from a somewhat complicated private life, her relationship with criminal profiler Jo Soulsby, now working in the same prison as Emily McCann, is as complicated as ever. Off one minute, on the next, but I ended up sympathising with both of them rather than wanting to bang their heads together.

As the two narrative strands collide, the pace suddenly picks up and I was swept along by the twists and turns of a damned good yarn, to use an old-fashioned phrase. My only niggles are a somewhat rushed climax, and two very jarring and anachronistic uses of the term WPC, one of my pet peeves in contemporary crime writing. The term has been obsolete since well before either Kate Daniels or Emily McCann would have started their working lives.

But that aside, Monument to Murder kept me turning the pages at an impressive rate, and this really was a book I found hard to put down. Characterisation, setting and atmosphere are all absolutely spot-on.