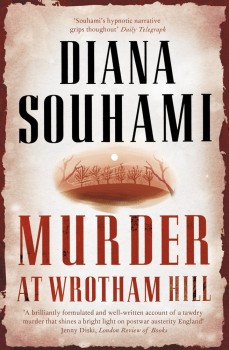 The year is 1946. Britain is struggling in post-war austerity. Dagmar Petrzywalski, a middle-aged, gentle, eccentric spinster, is found strangled at the side of a main road in Kent. Britain’s first celebrity policeman, Chief Inspector Robert Fabian – Fabian of the Yard – investigates

Why should an author with Diana Souhami’s stellar reputation be interested in a sordid little crime that happened almost 70 years ago?

Part of the answer is in the cast of characters. Britain’s first celebrity policeman, Chief Inspector Robert Fabian – Fabian of the Yard – called this one of his finest cases. Decades before the aids of CSI and CCTV, his painstaking and exhaustive real detective work brought the killer to justice. His early leads came from the brilliance and dedication of the legendary forensic scientist, Professor Keith Simpson. Counsel for the defence was Aubrey Melford Stevenson, later known as one of the toughest sentencing High Court judges. The final act was carried out by history’s most famous hangman, Albert Pierrepoint.

Another part lies in the strange juxtaposition of victim and killer, both one step removed from the rest of society. Dagmar Petrzywalski was a gentle, eccentric middle-aged spinster descended from a famous family of French patisserie makers. A former ‘hello girl’ for the Post Office, she had moved to the Kent countryside after her London home was bombed and was the very embodiment of austerity Britain’s post war self-sacrifice and thrift.

Her murderer, Harold Hagger, was her complete opposite, his life a story of petty crime, deceived wives and abandoned identities. The 45-year-old lorry driver, also known as Sidney Sinclair, lived in apparent respectability in a Cambridge village to disguise a record as a bigamist, army deserter, black marketer and opportunist criminal with a string of convictions. In the Kings Cross area of London he was known as ‘Basher’ Hagger for his violence.

Souhami’s trick is to portray this tawdry and charmless casual murder in the context of its era. The year was 1946, with Britain, having won the war of wars, losing the peace in a welter of rationing and enforced austerity. The emerging full story of the Holocaust, set against the atomic bombing of Japan, raises disturbing philosophical questions about the nature of crime and punishment. Her flat – almost police statement – style and exhaustive research into the life of each key player evokes the drabness of these joyless and worrying years with such brilliance the reader can almost feel the shabbiness and poverty. Her examination of the murder is as thorough as one of Simpson’s post mortems, capturing both the mood of the times and showing how ordinary men and women faced redefined definitions of evil whether anti-Semitism, the death of an individual, or the vast scale of wartime slaughter.

This, at times, deeply moving book is far more than the factual procedural it might appear. Its gripping portrait of post-war England, coupled with provocative questioning of our moral justification for our actions, will leave the reader with much to think about after the last page is turned. For those who actually want to be forced to think seriously about the balance between crime and punishment and go beyond the crash-bang action of many modern crime stories, it is a must read.