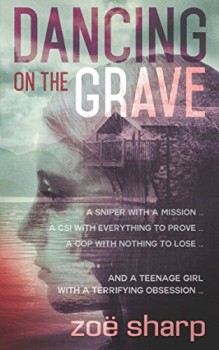 Detective Constable Nick Weston has swapped the pressures of London policing for the hills of Cumbria. When a call to attend a shooting gets his adrenaline racing again, he’s not impressed when the victim turns out to be a dog that had been worrying some young lambs. Crime Scene Investigator Grace McColl is inclined to take the shooting more seriously. The bullet that killed the dog came from a high-powered rifle rather the irate farmer’s old shotgun, and the shot was fired from some distance away.

Neither Nick nor Grace are happy about the idea of a sniper loose in the Cumbrian fells, but their bosses are not inclined to spend time and resources on an investigation into a dead dog. All that changes, though, when the sniper claims his next victim in a highly public manner.

Zoë Sharp’s standalone, Dancing on the Grave, is a tense military-style thriller with a meticulous attention to detail that embeds the reader as much in the thoughts and feelings of the killer and his accomplice as it does in the minds of the good guys. The man who goes by the name of Patrick Bardwell is calm, calculating and ruthless, and to see the world through the eyes of a sniper is to experience a very different take on everyday reality. Bardwell can kill at a vast distance and that makes him hard to catch.

Helping him is 17-year-old Edith Airey, daughter of a bullying special constable Jim Airey, a man who keeps an illicit gun store in his cellar. Edith has been brought up all her life to shoot, using her air rifle to cull squirrels and rabbits. She fantasises about living a more interesting life and becoming famous so she can get away from her unpleasant father and down-trodden mother. Edith craves the affection she’s never had, but the local boys are only interested in her for sex, not friendship or love. If she can’t have fame, Edith will happily settle for notoriety instead, and wants to follow in the footsteps of her hero Lyudmila Pavlichenko, a Russian sniper in World War II believed to be one of the most successful military snipers of all time.

Dancing on the Grave maintains a good balance between dark and light. Edith is hard to like but easy to empathise with. The sniper is strongly reminiscent of Frederick Forsyth’s classic assassin, the Jackal, and equally convincing. Despite seeing the brutal reality of kills, I still found myself wanting him to complete his self-inflicted mission and then vanish into the fells. I liked Grace McColl’s analytical mind and Nick Weston’s wry humour. Both characters carried some personal baggage, but they wore it lightly, like a day sack for a walk in the hills rather than the bulging rucksacks full of history that some authors like to lumber their creations with.

The quality of Sharp’s writing and the frequently changing points of view, all clearly contained within separate chapters, drive the story on at a relentless pace. Both character and plot are well balanced and sharply defined, and even inhabiting the minds of the killers doesn’t deliver up all their secrets. Dancing on the Grave is a thriller that delivers on all levels. I found it impossible to walk away until I knew the end of the story.