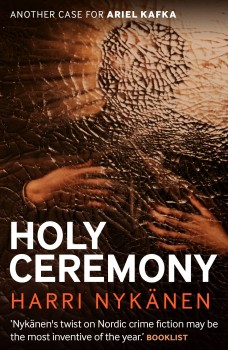 Lieutenant Ariel Kafka from the Violent Crime Unit in Helsinki investigates a bizarre case of a woman’s body stolen from a morgue. He’s been chosen by someone who wants to exact revenge and who might be a perpetrator or a severely damaged soul.

Lieutenant Ariel ‘the Flame of God’ Kafka from the Violent Crime Unit is one of only two Jewish cops in Helsinki. He’s not very bothered by his religious and cultural heritage, though occasionally evaluates the meaning of having a family. His wry sense of humour helps him to navigate through the meanders of political nonsense and office politics, and as a dedicated hard-working detective he always wants to get the answers.

A self-confessed ‘pitiful bachelor,’ he doesn’t ask for much apart from ‘a good woman, and with that I was asking for everything.’ A simple life in a nutshell, sans emotional baggage. But yet again work takes over.

In this case Kafka is faced with a strange situation: a woman’s body scrawled with religious texts is found in a Helsinki apartment. The place looks abandoned and dated as if inhabited by some old person. Quotes from the Bible rule out a case of necrophilia. The forensic examiner Vourio isn’t surprised though. It turned out that Roosa Nevala wasn’t murdered as he’s seen the body already at the morgue.

Roosa had psychiatric problems, overdosed on sedatives and apparently through death she had wanted to contribute to the struggle in God’s name. The flat, or rather the crime scene, belonged to her boyfriend. The man himself, Reijo Laurén, stole the body again the following day and burnt it on a funeral pyre in the city’s Central Park, and then disappeared. He confesses this to Kafka, via frequent phone calls.

Also, a letter from The Adorner of the Sacred/Holy Vault, addressed to Kafka, refers to a holy ceremony that will end only after the evil dragon is slain. What dragon and terrible evil is unclear. Laurén drip-feeds the quotes at own pace, instructs Kafka to ‘follow the signs of fire to their origins,’ and leaves police in doubt about both his intentions and state of mind. No one can determine whether the perpetrator is damaged rather than dangerous.

What happens soon is a tense race against time to find Laurén and to prevent any further killings. Kafka and his team trawl through reluctantly given bits of information relating to Laurén’s life and his time at the Daybreak church boarding school, and they discover links to various people, some of them members of the enigmatic Christian Brotherhood of the Scared Vault, and others who seem to have caused a lot of pain. Nobody is willing to shed any light on the mysterious society, especially as they consider Laurén not to be capable of violence which he despises according to his ex-wife, devoted daughter Mandi and some old friends.

The mystery deepens. As Kafka follows leads he realises that there might be connection between earlier unsolved cases and subsequent murders. What starts as a disturbing treatment of a corpse ends with full-on vengeance in a plot so tightly woven that no one could predict the surprising finale.

Harri Nykänen’s Holy Ceremony is his third book translated into English by Kristian London. Nykänen combines classic Jewish themes, an unusual crime set-up and black yet subtle humour which make this Nordic crime fiction a very enjoyable and engaging read. There are no hilarious jokes and very few gruesome descriptions of quite nasty deaths. The author deals sensitively with the historical abuse and religious dogma which dominate lives of several characters, resulting in the disturbing behaviour over the years.