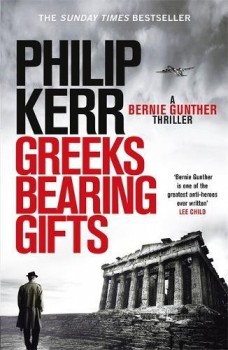 Bernie Gunther starts a new career as an insurance investigator, but a trip to Greece to investigate a claim for a lost ship has a none-too-comfortable connection with wartime events.

With Philip Kerr’s death earlier this year, this looks like the last but one instalment in the Bernie Gunther series – another is due for publication next year. As the book opens in 1957, ex-policeman Bernie is working under an assumed name in Munich as a mortuary attendant, trying to avoid anything that would bring to light his previous role as a policeman serving top Nazis, Heydrich in particular.

Unfortunately Bernie is spotted by someone who sees an opportunity to exploit, and it is only with some quick thinking that he avoids a set-up. His solution does a lawyer a good turn, who returns the favour by way of a job at a major insurance company as a claims adjustor. Bernie proves to be useful, and when a claim is received on a boat destroyed by fire off the Peloponnese coast, he is despatched to Athens to check it out.

The lost boat was supposedly engaged on the recovery of gold from a wreck, gold stolen from the Jews of Salonika who, after being told they were purchasing their safety, were then sent to the Nazi death camps. With the war a very recent memory, Germans are understandably still resented by many Greeks, but Bernie finds several of his countrymen surviving in Athens.

Bernie feels a strong sense of guilt about the events of the Nazi years, and accepts it as appropriate when a local detective puts pressure on him to locate certain war criminals associated with the theft who are still at large. At the same time, Bernie is cynical, not only about the whitewashing of Nazis in West Germany, but also about the preparedness of the Greek political establishment to forget the past for sufficient cash.

Bernie’s investigations show that the tale he has been given about the boat is less than complete, and a death follows before he uncovers the real story. He is partnered by a young attractive Greek girl who likes his company. It takes him some time to rid himself of his suspicion that she has some ulterior motive, and much as he hopes for romance, the world-weary Bernie knows that he never really has a chance.

This is a fitting addition to the Berlin Noir series, in which Bernie survives the war by moral compromises that continue to dog his conscience. I particularly enjoy the mixture of well-researched fact and fiction in the series. Bernie’s wisecracks and cynical musings hold some serious ideas, like his view that the EEC provides for a less than democratic centrally-planned system in Europe led by Germany, all done without the need for military action.

The quality of Kerr’s work blurs the line between thrillers and literature, serious stuff bringing to life a period of the recent past now slipping into history, and at the same time great thrillers. He will be greatly missed.