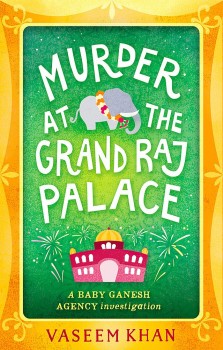 Murder at the Grand Raj Palace

Retired police inspector Ashwin Chopra takes on the case of a man found dead in the Grand Raj Palace hotel, while his wife Poppy is kept busy seeking a reluctant bride.

Retired police inspector Ashwin Chopra undertakes the latest Baby Ganesh Agency investigation in Mumbai’s poshest hotel, where art collector Hollis Burbank has been found with a knife in his chest. Tripathi, an old police colleague, believes that his superior’s enthusiasm for writing off the death as suicide is a matter of politics, and has asked Chopra to do a little digging.

Chopra is accompanied by his wife Poppy, keen to secure Chopra’s participation in planning celebrations for their 40th wedding anniversary, and by two young members of the family – Irfan, a street urchin, and Ganesh, a baby elephant bequeathed to Chopra by his uncle. The two youngest become embroiled in a spat with an obnoxious lemur also staying at the hotel, who turns out to be a film star.

Chopra begins his investigations and finds that Burbank was an unpleasant character, disliked by everybody, including his assistant Loomis, Lisa Taylor the agent for a firm of art auctioneers, and several artists or art collectors who have all been gratuitously insulted. Burbank recently acquired a very valuable painting under the nose of a rival, who felt the work should be retained in its country of origin.

Further digging reveals even more people with a reason to dislike him. Chopra finds a link to a disaster some 30 years ago, involving a leakage of chemicals. The chemical mentioned, methyl isocyanate, is one of those involved in the 1984 Bhopal disaster, an event in which half a million people were exposed and thousands died, perhaps the worst industrial disaster of all time.

Poppy, being denied the participation of her husband in planning festivities, has been taking an interest in a wedding planned at the hotel between two aristocratic families. By chance, Poppy meets Anjali, the bride, who expresses frustration with the endless squabbles between the two families. When Anjali disappears, her grandmother the matriarch puts her head together with Poppy, who luckily has absorbed enough of Chopra’s skills to be of assistance.

Chopra is his usual active self, but as the very tight deadline imposed for results draws near, the truth about events remains elusive. However, one or two late clues enable Chopra to assemble the cast for a reveal Poirot-style and deliver the perpetrator into Tripathi’s hands.

Most previous outings for the agency have included a glimpse into Mumbai’s seedier side, and this is missing here, although we do get a brief glimpse of the author’s views on the benefits of the British Raj, and the qualities of Indian politicians since independence. The story is delivered with the usual good humour. Ganesh steals the show of course, attracting a cast of several dozen when invited to demonstrate his skill at tracking, and showing the insouciance one would expect of a pachyderm in a top-line hotel.