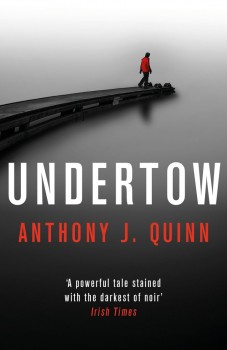 An Irish detective’s suicide leads PSNI Inspector Celcius Daly across the border into a labyrinth of lies, corruption and murderous violence.

This fourth in Anthony J Quinn’s superb series featuring the divorced, morose, antisocial, mid-40s Inspector Celcius Daly of the Police Service of Northern Ireland is very much a book of our times.

It’s set along the beautiful and wild shores of Lough Neagh and across the border in an Irish Republic still reeling the effects of the banking and property crash, and deals with the effects of Brexit and the present and future opportunities for organised crime as well as examining the betrayals and schism linked to the 30 years of the Troubles.

Quinn, a native of County Tyrone, is a fine writer. His writing has a melancholy quality of grim, bleak poetry as he outlines the betrayal, brutality, pathos and compassion of border communities and a generation manipulated and abandoned by greedy politicians and former paramilitaries.

Finely honed though the plot may be, Quinn’s greatest skill is in the evocation of the fierce and unforgiving landscape, while the ambiguous answers to many of the moral questions he raises are totally apt for a story dealing with the consequences of living on a divided island with a bloody past.

Celsius Daly is a strange protagonist, obsessed by his family’s past to the point of paranoia, using his job to avoid human interaction. He is also smart and tenacious, but his attitude and some distinctly individualistic methods, make him unpopular with both his colleagues and seniors.

Called to an apparent suicide in Lough Neagh near his home, Daly’s suspicions are aroused when the pathologist refuses to rule out murder as a cause of death. When the body is identified as Detective Brian Carey of An Garda Síochána he knows he must investigate further.

Carey was stationed in Dreesh, a small village and farming community not far on the Republic side of the border. A visit to check his case load shows a typically desolate rural community, its businesses gone and, like many southern townships, crippled by the building boom and following crash. But Daly suspects something more is wrong when he notices most of its inhabitants seem to drive high range cars, far above the ability of jobless people to own or maintain.

Smuggling, as former paramilitaries reinvent themselves as criminal manipulators and some of those supposed to police them turn a blind eye, is rife along the border. Dreesh is the base of a notorious former IRA enforcer, now making a fortune running diesel into Ulster.

It is also the home of Carey’s former colleague, Garda Sergeant Peter McKenna, very much a mirror image of Daly, who has found it politic to ignore much of the smuggling activity. But Carey had believed he was on the verge of finding enough evidence to move against the smuggling gang.

Out of his jurisdiction and his comfort zone, Daly is plunged into a shadowy world of informers, drunken ex-policemen, serving officers from both sides of the border, intelligence agents, past and current IRA terrorists and smugglers. With little co-operation between the PSNI and the Garda and kept in the dark by his own bosses, his dogged investigation will spark an outbreak of murderous violence.

All roads lead to a dead end as Daly wonders who to trust and tries to trace a mysterious PSNI Special Branch man and he faces intense personal pressure as a shadow from his past attempts to destroy his reputation and both his professional and personal life.

This driving, dark, twisted story is unputdownable. It reflects not only the island’s problems, but a psyche that is unmistakeably Irish.