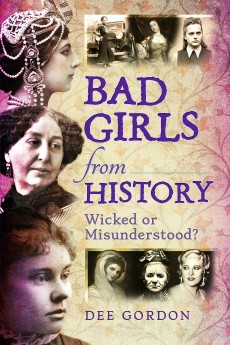 An anthology of prostitutes, mistresses, murderers and troublemakers.

From the troubled and misguided to the totally evil, this book is a romp through some of history’s most notorious women. It includes the well-known, such as Ruth Ellis and Emma Hamilton, and lesser-known bad girls such as Charlotte Bryant and Mary Jeffries. The book includes bad women from Britain, Europe and the United States, giving potted histories of each.

It aims to raise the question of whether these women were truly wicked, or whether we have misunderstood their actions and what motivated them to behave as they did. Certainly some of them got off to a bad start in life – born into poverty, pimped by their parents, married off at an early age. Others were born into well-to-do families and seemed to have every privilege – why then did they turn to murder?

Unfortunately, the book offers little in the way of answers. The profile of each woman is so short there’s insufficient room to explore their living conditions, effect of upbringing, social conditions of the time, education, or the attractions of life as a criminal or courtesan. To answer the question of whether they were wicked or misunderstood needs more background and analysis, which just isn’t there. The profiles are overviews of the women – when and where they lived, and what they did.

The book is flawed. Firstly, some of the information is inaccurate: for example, it states that one of the women was identified in the early 1800s when her photograph was published in a newspaper. As she was dead by the time photography was invented, this is impossible. Secondly, there are some odd sentence constructions, wayward punctuation and over-use of ellipsis and exclamation marks.

My main concern with the book is its organisation. It’s divided into chapters, grouping together women who are all ‘bad’ in the same way, for example, ‘Madams, Prostitutes and Adulterers’. But there is also a chapter titled ‘Courtesans and Mistresses’. As many of the women fall between these groups, it would make more sense to make the chapters ‘Prostitutes, Madams and Courtesans’ (dealing with women who were paid for sex), and ‘Mistresses and Adulterers’ (women who loved outside marriage). Further, some of the women are wrongly characterised: Anne and Mary Boleyn are included in ‘Madams, Prostitutes and Adulterers’: surely they fit more naturally into ‘Mistresses’?

Of greatest concern, though, is the last chapter, a catch-all entitled ‘The Rebel Collection – Pirates, Witches, Megalomaniacs, Exhibitionists’ which bizarrely includes Sappho, Mary Wollstonecraft and Violet Trefusis. Even more bizarrely, they sit alongside Dorothea Binz (SS officer at Ravensbruck) and Irma Grese (SS officer at Belsen). As Myra Hindley is deliberately omitted because she’s an ‘obvious choice’, it seems strange to include Binz and Grese. And it is hard to see in what way are they to be regarded as ‘rebels’.

If you want a jolly romp through history without thinking too much about what happened and what it meant to people, this is the book for you. If you want considered biographies that respect both the subjects and their victims, give it a miss.