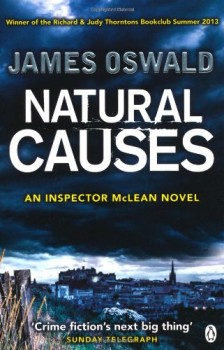 James Oswald has joined the growing ranks of self-published authors picked up by a mainstream publisher, thereby fuelling the hopes and dreams of countless other writers all over the world. But for their publication, Penguin toned down the original opening, jettisoning a brutal description of the killing of a young woman. That original opener (now included at the back of the book so that readers can judge it for themselves), and the remainder of the 3,000 words, plus synopsis, was enough to get Natural Causes shortlisted for the Crime Writers’ Association’s Debut Dagger in 2007. Now several years later, it forms the start of a series published by Penguin.

As the original opener was both graphic and written in the present tense, two things for which I have little tolerance, I think dropping it was a wise move. The book now has a far more prosaic opening, with newly-promoted Detective Inspector Tony McLean arriving at the scene of a brutal murder by accident, and volunteering his services to the uniformed officers doing their best to contain the crime scene.

McLean, in common with most fiction detectives, has something in his past that haunts him, in his case two somethings. Firstly the death of his parents in a car accident when he was only four years old, and secondly the death by drowning of his girlfriend. He was brought up by his elderly grandmother who’s now been lying in a coma for the past 18 months. McLean still visits her, even though he has effectively said goodbye many months ago to the woman he’d known and loved.

But her death, when it comes, hits him harder than he’d expected, causing more problems at a time when he’s already investigating more than one murder. According to his boss, the murder of the wealthy, respectable Barnaby Smythe should take precedence over MacLean’s other case, that of the mummified body of a young woman, brutally killed and then walled up in the basement of a house. Maclean is certain there were ritualistic elements to the woman’s death. She appears to have been inside some sort of circle of protection, her vital organs removed and placed in six jars  in alcoves around the room, left alongside some other objects.

Even though she’s probably been dead for around 60 years, MacLean is determined to bring her killers to justice and, despite a spate of high-profile murders in Edinburgh, he insists on pursuing his investigation.

Oswald has produced an engaging mix of police procedural and urban fantasy, reminiscent of series by both Stephen Leather and Ben Aaronovitch, but the horror elements are far less than in Leather’s Jack Nightingale books, and the supernatural is less overt than in the Rivers of London series. For the most part, Natural Causes is an interesting and entertaining crime novel with an engaging main character who never manages to keep his mobile phone in working order for more than five minutes. The supporting cast are a great bunch, from the aptly-named Grumpy Bob to Chief Superintendent Jayne MacIntyre, a woman whose life is made no easier by MacLean’s antagonistic relationship with Chief Inspector Charles Dugaid.

It’s in the police procedural side of things where Natural Causes is at its strongest. Oswald has a light touch with characterisation that he weaves around an intriguing storyline and provided he can stay away from the sort of repetitive plot elements and gratuitous gore found in Leather’s Jack Nightingale books, this series is one I’ll be very happy to follow.