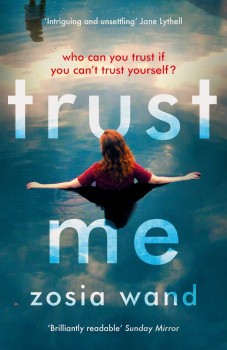 It’s not like 17-year-old Sam to skip school. Lizzie, his father’s partner, is determined to find out what is threatening the family unit she’s built up.

Lizzie is 27 years old and is living with the somewhat improbably named Jonty in a small town near Coniston Water in Cumbria. Jonty is a lot older than her and has a 17-year-old son and a young daughter from a marriage that has long since disintegrated. Lizzie works as the town’s festival organiser and enjoys her job. She coped well when Jonty’s son Sam and his sister Nell ended up living with them after Jonty’s ex-wife went to Ireland to look after her elderly mother. Things weren’t easy at first, but they managed, and Lizzie feels proud of the family they’ve become.

When Lizzie gets a call to go to Sam’s school to have a word with the headmaster, she’s shocked to discover that Sam has been skipping school without telling her or his dad. She doesn’t understand why he’s been doing that, and Sam isn’t exactly forthcoming when challenged on the subject. But Lizzie takes her responsibilities as his almost-stepmother seriously and is determined to find the underlying cause of what’s bothering the now-withdrawn Sam.

Zosia Wand’s debut, Trust Me, is a stunningly good piece of writing that sucked me in right from the start, and even though nothing seems to happen for quite a while, that didn’t matter. The picture she paints of Lizzie, the very epitome of an old head on young shoulders, is compelling. Lizzie never had much of a family when she was growing up, so the family she’s made for herself with the somewhat self-obsessed Jonty and his children is important to her, and it’s something she’ll fight like a lioness to preserve.

Lizzie has few friends in the area, but when she meets the glamourous Rebecca, she’s happy to kick over the domestic traces for a while as she gets swept up in an intense friendship that makes her question everything she she’s come to believe to be true. Lizzie’s relationship with Sam is at the heart of the book, raising questions as to whether it’s possible for her and Sam to be nothing more than friends and whether she has somehow overstepped the bounds of propriety with him.

Trust Me is a book that worms its way into my affections, much like Rebecca does with Lizzie, but as the story unfolds, I was left questioning everything I’d come to believe and at times, I started to see Lizzie and Sam through the eyes of others, and wondered whether I’d fallen for yet another of the unreliable narrators who seem so in fashion now. Wand’s writing is absorbing and her characters are both strong and real. The disintegration of Lizzie’s cherished family life was painful but it was hard to work out how much of that was her own fault and how much was nothing more than an innocent series of events seen through the censorious eyes of others.

Wand skilfully weaves a cleverly constructed family saga that combines domestic noir and psychological thriller into an impressive whole, using writing that is both is both assured and lyrical as the glue to hold everything together, while everything Lizzie holds dear starts to fall apart. Wand’s love of the Lake District shines through, and the sense of place was palpable. I could smell the rain, feel the press of the hills and see sunlight sparkle on the tarns. I enjoyed all that, but most of all, I wanted a happy ending, and I had to make myself late for several chores to find out how things worked out for Lizzie, Sam and Jonty. Wand’s writing contains definite echoes of the inimitable Daphne du Maurier, and not just in the naming of one of the main characters.