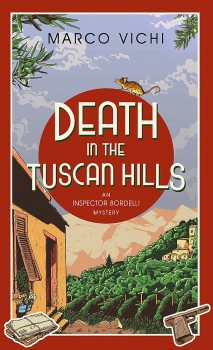 Death in the Tuscan Hills

Inspector Bordelli has been investigating a horrible crime involving a young boy. The ramifications of this are so bad that Bordelli decides to leave his job – he just walks out, and starts a new life in the countryside.

Following a horrific crime, Inspector Bordelli of the Florence police force decides to give up his job and buy an old property up in the hills behind Florence. He decides that life in the countryside, learning how to grow vegetables, reading, and walking daily in the woods, will be preferable to the sort of life that put his friends at risk. In trying to solve yet another horrific crime, which involved the murder of a young boy, his then girlfriend had been brutally attacked. That was the end of it – he just left the force.

Bordelli’s life as a retired person is described in the most perceptive detail,  from the way in which the milk, bread and a paper appear magically every morning to how he gradually begins to appreciate the opportunities he now has to sit and read by his angle-iron grate, or to go for long walks in the woods. And there’s the way he begins to see that there are so many new things to learn, including cooking and growing vegetables. He also begins to appreciate the natural things around him, such as the wildlife, the trees and the night sky.

However, alongside such peaceful activities, Bordelli still suffers the regret and sadness he has for what happened to his ex-girlfriend. Meeting new friends and maintaining links with previous ones is not enough to cure him of his previous love. He is unable to rest without doing something to find some sort of justice for her.

The loneliness of Bordelli’s property helps to maintain an undercurrent of threat throughout the story. For example, cars pulling up outside at night could mean danger, the sound of the wind in the olive groves could indicate a danger, and just walking for miles in the woods alone could be dangerous, given Bordelli’s previous history. And yet this Italian countryside is painted as a benign community in which the worst cannot happen. Bordelli seems to thrive not only in this countryside but also back in the city which he visits now and then.

One day a visitor, who lives at the lonely castle that he can see in the distance, calls on him. She has also suffered from a horrible crime which has remained unsolved for many years and Bordelli is unable to resist looking into it for her. In due course, he is able to give her some sort of peace at last. And it gives him an idea.

So, woven through this lovely account of an idyllic life in the countryside is Bordelli’s quite slow resolution of his problems. Also provided are some interesting windows onto the thought-processes of some of his contacts from the past. It becomes clear that justice is not always straightforward. There are different points of view – morality and justice are very interesting concepts which are thoroughly explored in the book.