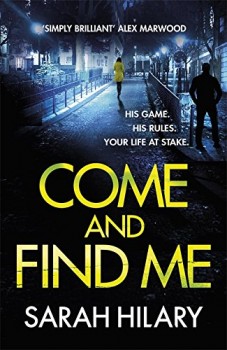 Michael Vokey is a man with a bad reputation. He attacked a young mother in front of her child, leaving them both with terrible mental scars. In a nightmare scenario for the police, he’s now on the run after breaking out of prison in the chaos that followed a violent riot which left several men dead and mutilated, with others in hospital. The eyes of the press are on DI Marnie Rome as her team desperately follow whatever leads they can dig up that might help them find Vokey before he harms anyone else.

Two women, Lara Chorley and Ruth Hull, have been writing to Vokey while he was in prison, and both are convinced that he’s been deeply wronged by the criminal justice system. Marnie fears that one of the women might know where Vokey can be found, and that knowledge will be a dangerous prize, but neither of the women are prepared to give Vokey up.

This is the fifth book in Sarah Hilary’s series featuring DI Marnie Rome and DS Noah Jake and although they can all be read as standalones, you’ll find added depths if you’ve followed their careers from the outset. Marnie has the almost obligatory tormented backstory, but in Hilary’s competent hands this adds depth, rather than turning into an albatross around her character’s neck, as happens all too often in police procedurals where writers seem to be trying to outdo each other with the baggage they saddle their creations with.

Marnie has to live with the fact that her parents were murdered by the teenage boy they’d fostered into their family, but gradually, it’s become clear that nothing is quite as clear-cut as Marnie had once believed it to be. Stephen Keele is still in prison for their murders; the same prison as the one that failed to hold onto Michael Vokey, and Keele suffered badly from smoke inhalation, leaving Marnie to face the prospect that he might die before he gives up all his secrets.

Noah has his own cross to bear as well. His younger brother Sol has always been the problem one in the family, involved with drugs and various shady deals, but at the end of the last book, he took a step too far onto the wrong side of the tracks and ended up behind bars. Noah has to live with the guilt that it was him who put Sol away.

The one thing you can guarantee with Hilary’s books is that nothing is ever quite what it seems and Come and Find Me is no exception. I struggled alongside Marnie trying to peel back the layers surrounding Vokey. As soon as I developed an idea of what might be going on, Hilary neatly whipped the rug from under my feet yet again. Her writing is both strong and deep, and she has an enviable knack of creating interesting and engaging characters. I was pleased to see the return of prison bad boy Aidan Duffy, with his habit of being able to get under Marnie’s skin, even though she tries hard not to rise to his bait. This is a series where the supporting cast are every bit as interesting as the protagonists, and it makes such a refreshing change to read a police procedural that manages to overturn stereotypes every time.