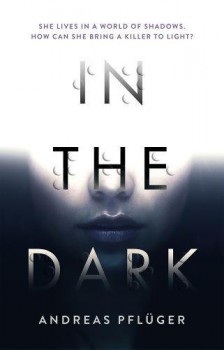 Five years ago, tracking down a ruthless serial killer would have been all in a day’s work. But five years ago, Jenny Aaron wasn’t blind.

Jenny Aaron used to carry her name with pride. As daughter of one of the best counter-terrorist agents, and one of the best German government assassins in her own right, she had every reason to. Until five years ago. It felt wrong, but still she and Niko Kvist, her professional partner and the man she loved, went in. Within minutes, she was fleeing for her life, abandoning Niko and leaving him for dead. She woke up blind.

Now, her old department in Berlin wants her to help catch a ruthless serial killer. Jenny might be blind, but the only handicap she can’t surmount is the guilt of running without Niko. Her colleagues are behind her. Niko doesn’t blame her, but without the memories of those fateful minutes when the two of them were ambushed, Jenny cannot understand why she abandoned Niko. She cannot put her ghosts to rest.

Jenny’s world is dark, her thoughts are darker, but she is stepping back into a world where darkness rules. She will be able to use her unique strengths. However, she doesn’t know it is a world where her past will catch up with her present, and almost certainly destroy her small chance of staying alive.

Although Aaron is the protagonist, this story, written primarily in the third person present tense, does bring in multiple points of view. In the Dark explores Aaron’s shadowy world in intimate detail: her way of communicating with her surroundings and the other characters, her unique way of thinking in the present, along with her memories. Moreover, each of the main players is treated with the same exceptional attention to detail, and the reader has a sharp vision of each person from their actions, backstory and introspections.

However, one can have too much of a good thing. Unique writing styles, along with quirky fictional characters in novels, are frighteningly similar to eccentricities in a person; that which attracts in the beginning often irritates or destroys the relationship. On starting this story, it was as if I was embarking on an incredible journey of discovery. The detailed insight into a blind person’s world almost overwhelmed me. It was so intimate that it felt as if the author had genuine experience, rather than having relied on research.

Unfortunately, the amount of detail and introspection did slow the pacing. Coupled with the same attention to the minutiae for each of the main characters, it gave a sensation of wading through snow at times. This is a shame, on two counts. First, because the plot is intriguing and could be high speed. Second, because there is one character who does not receive this treatment, and that person’s lack of development shines like a neon light, detracting from the twist.

Although I realise the Jenny and her colleagues should be among the best in their trade, I found their perfection overdone. Towards the end I became less convinced by Jenny’s unending list of, dare I say, almost superpowers. It certainly did not convince me there was going to be much of a challenge when faced with the enemy.

The backstory, vaguely camouflaged as introspection, is often too long and intrusive. The sheer number of characters from the past and present is taxing and as a result, this is not an easy read. But despite that, In the Dark is beautifully senses-driven, giving a real feel of time and place from a unique perspective. It is a polished, intelligent read with fascinating characters and a good plot.