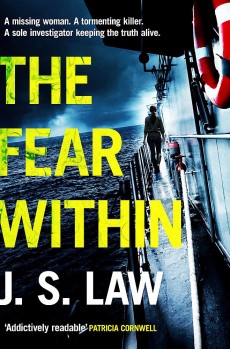 A young woman goes missing from a naval warship in Portsmouth. Lieutenant Dani Lewis is called in to investigate.

Lieutenant Dani Lewis is a Royal Navy investigator. In her first outing, The Dark Beneath (originally published and reviewed here as Tenacity), she broke open a major drug smuggling operation connected with a submarine, and was also responsible for exposing the crimes of Christopher Hamilton, believed to be the country’s most prolific serial killer. No one knows the true extent of Hamilton’s murderous activities as he preyed on women for years, but only a small number of bodies have ever been found, and Hamilton has never revealed their whereabouts.

Despite her success, Dani isn’t popular with her ultimate boss, Captain Harrow-Brown, although for me coming fresh to the series, it’s not altogether easy to get a handle on why he’s so annoyed with Dani, especially as the book opens with a dramatic hostage rescue scenario which once again thrusts Dani into the limelight with the press, but maybe that’s what he has against her. She’s become the poster girl for the investigation branch and maybe Harrow-Brown thinks she’s deliberately hogging the limelight.

When the National Crime Agency make a request for Dani’s help – fingers of women believed to be victims of Hamilton have been sent to them in the post – Harrow-Brown refuses to second her to their investigation, despite Dani’s protests, and she’s relegated to looking into what appears to be the routine disappearance of a young rating about the naval warship Defiance, currently moored in Portsmouth. Natasha Moore is missing, and although Dani knows that in the majority of cases the person concerned will turn up unharmed a day or two later, there’s something about this case that doesn’t feel right to her, possibly because Natasha Moore is only just 18 and on the face of it there’s no reason why she should be ‘absent from her place of duty.’ There’s also something slightly off about the responses she’s getting from the missing woman’s superiors.

The Fear Within plays out in two converging timelines, one focussing on the investigation into Natasha Moore’s disappearance and the other following Natasha herself from her first day aboard Defiance to the point at which she goes missing. At first, I found the jumps back to Natasha’s story something of an irritation and just wanted the main story to progress, but I got gradually more and more immersed in the story of her life and work on a navy ship, trying to spot who amongst her colleagues and superiors might have been responsible for her going missing. By the mid-point in the book, I was equally caught up in both storylines and my initial reservations had been jettisoned overboard.

JS Law, a former Royal navy engineer, writes with the easy confidence that only someone who has lived the life they’re talking about can bring to the party. I would have preferred a bit more explanation for some of the many acronyms that crop up in the book, and there was at times an uneasy mix of backstory that threatened to become overwhelming, but both those things were a small price to pay for a porthole into a closed world I know very little about. It’s clear that the shadows cast by Dani’s first investigation have by no means lifted and the issue of drugs smuggling and the Hamilton investigation are certainly not at an end, especially not as Dani struggles to come to grips with some very personal revelations that have rocked her world with the force of sea gale.

This is a quality thriller with good, solid characters, strong storytelling and an unusual premise. Army thrillers come along thick and fast, but Law has cornered the market when it comes to the Royal Navy.