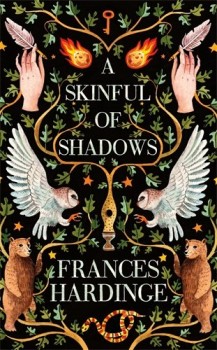 A Skinful of Shadows

Twelve-year-old Makepeace is caught up in both a civil war and a war for possession of her own mind, and finds friends and allies in the most unlikely places.

Twelve-year-old Makepeace has lived most of her life in a small village called Poplar, in a country on the brink of civil war. She knows nothing of her father and is now mourning the loss of her mother, and still carries a crushing burden of guilt for her mother’s death, but doesn’t know why she feels that way. Her mother used to take Makepeace into graveyards at night and teach her how to prevent the ghosts of the recently dead seeking refuge inside her head. She was also taught to fear Grizehayes, the old house her mother had escaped from.

When Makepeace tries to keep her mother’s ghost from entering her mind and body, she ends up by accident sharing her mind with the ghost of a tormented dancing bear, hounded to a cruel death in the marshes near a lonely inn. Far from being safe from the shadow of Grizehayes after her mother’s death, Makepeace is whisked off there and forced to live as a servant of the deeply sinister Fellmotte family in an atmosphere redolent with family history and casual cruelty.

Her only friends are the castle’s dogs and the half-brother whose existence she’d been wholly unaware of until her arrival at Grizehayes. Together Makepeace and James explore the castle’s secrets and plot their frequent, unsuccessful escapes, but Makepeace is not ready to share all her secrets. Bear is hers and hers alone, her friend and protector, his instincts sometimes the only thing that keeps her alive as she delves ever deeper into the horrors that lurk within both Grizehayes and the Fellmottes.

Frances Hardinge brilliantly evokes the feel of England struggling in the grip of a civil war that has set communities and even families against each other. Her portrait of a young girl’s struggle to prevent her body being turned into a vessel to house the malignant ghosts of a family that puts duty to its lineage over any sense of self-worth is powerful and poignant.

To survive, Makepeace must make her peace with friends and enemies alike. She learns to love and trust the primeval presence of Bear in her mind, but then has other, more difficult choices to make, and how she reconciles herself to the multiple – and often warring factions – within her own mind is breathtaking in its beauty and depth. Antagonists must learn to work together and trust each other, and it’s the nature of trust that is at the heart of A Skinful of Shadows.

Hardinge’s writing is lyrical and insightful, and the book wears it research lightly whilst skilfully weaving the sights, sounds and smells of the English Civil War into its very fabric. This is a story which challenges attitudes to loyalty and love and gives a new meaning to the idea of second chances. This is young adult writing at its finest and I was entranced from start to finish by this ghost story with a difference, which provides a haunting narrative, in every sense of the word.