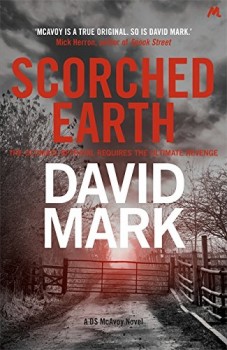 A former Mozambican guerrilla fighter enters England illegally bent on revenge – and DS Aector McAvoy is plunged into a case where present crimes lead him to an enemy from his past.

David Mark, a former crime reporter for the Yorkshire Post, has etched his name as one of the darkest new faces of British crime writing, by following the dictum which has sold millions for authors like Gerald Seymour – truth can often be stranger than any fiction.

This seventh adventure of his shambling Scottish giant DS Aector McAvoy is solidly based on real events – the exploitation and betrayal of emerging African peoples by international conglomerates and the unspeakable brutalities and traumas this all too often breeds. In McAvoy, Mark has created a big hero with a huge heart, a man unafraid to face that dreadful dilemma few policemen meet in their careers – when does adherence to duty interfere with your responsibilities as a human being?

Backed by a loving family – for whom he literally fought in earlier stories – and a one-off, at least on the surface, tough-as-nails woman boss, it is a question McAvoy never shirks and Mark’s rich, distinctive style and skill at weaving light into the darkest fabric has produced a protagonist who is both ‘real’ and compassionate.

This multi-layered thriller is largely set in a darkly-realised Hull and Humberside area – the city itself is almost a character – but originates in the filth, starvation and appalling atrocities of the 1980s Mozambique civil war and later the squalor of the Calais ‘Jungle’ immigrant camp.

A young African, a former ‘boy soldier’ with RENAMO, the Mozambican National Resistance, is determined to reach England to seek retribution on the man he believes betrayed his dreams for his own and the future of his country.

Despite a 1992 United Nations brokered peace, there have been renewed clashes since 2012, bringing the background right up to date. As always, Mark delivers a fast-moving plot with complex, but believable, characters. Massive and graphic violence, greed and revenge are offset by loyalty, determination, sensitivity and flashes of humour.

It’s impossible to describe the twisted plot without spoilers, but multiple killings, including a body pinned to a wall, a missing person, a kidnap, a hit-and-run and a shoot-out on the Humber Bridge ensure McAvoy to is tested to breaking point as the crimes of the present lead him to a final confrontation with a corrupt and brutal enemy from his own past.

Mark introduces the characters logically with some sensitive portrayals of their relationships both at work and home. His style allows the reader to follow the story almost as if watching a documentary programme.

The bad guys are thoroughly bad, although not all entirely devoid of a degree of decency according to their own rules. Criminals from two continents, as well as home-grown, display motives which vary widely – you may even wind up asking yourself if the revenge-driven man whose obsession drives him to the most unspeakable actions is the worst of those involved.

A positive bloodbath of violence may leave some readers questioning the likelihood of it all, but in the murky and corrupt world of international business, nothing is impossible, a fact which Mark exploits brilliantly, right through to an ending which should at least leave you with a smile. This is a genuine, fast-paced thriller with a bit of heart.