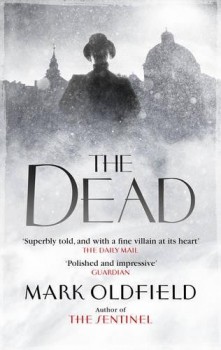 Investigator Ana Maria Galindez seeks Leopoldo Guzman, who recently reappeared in Madrid after years of dirty work in a shadowy squad created by Franco – even now reluctant to surrender its powers.

Investigator Ana Maria Galindez begins the book helpless at the hands of Leopoldo Guzman, who has abducted her to establish what she knows about an old mine in the sierra, where 15 desiccated bodies had laid hidden since the 1950s. She manages to escape, determined to bring Guzman to justice both for this insult to her, and for the string of murders in the past for which he was culpable.

Instalments in her progress are interrupted by a story from some 20 years back. Guzman, a leader in the Brigada Especial who undertook special projects under Franco’s government, is not enamoured of the new democratic Spain, and is looking for a big payment for past services before he retires. His boss, Gutierrez, wants him to complete one last job, assembly of evidence of past dirty work of both the Brigada Especial and a rival paramilitary group, the Centinelas.

Guzman has appeared before in The Sentinal and The Exile, a sociopath with few redeeming features, brutally imposing the will of Franco’s regime. He remains boorish and rude and still capable of violence at a moment’s notice, but here shows signs of humanity. His foes have little of that, in particular an Italian who has had Guzman in his sights since a terrible incident in 1965, when a bus full of schoolchildren ended up as victims in a power play between paramilitary groups.

The book alternates episodes from 1982 and 2010, with occasional brief reports on the 1965 event. Keeping track of the story with all this moving backwards and forwards calls for careful attention; the sub-chapter headings with a place and time are essential, but even then it is easy to get confused. With limited links between the two stories, it is not altogether clear what the point is.

For the earlier books in the series I had small difficulty suspending disbelief; the latest did, however, step rather too far towards melodrama for my taste. Guzman’s shouting and gratuitous insults get very wearing. The Centinelas meet in sinister cloaks in an old monastery, rather too much Da Vinci code.

Galindez remains an interesting character, a woman with a minority sexual orientation in a society where traditional values remain strong, understandably prickly but with plenty of resource. However, she is never really given a chance to combat the fiendish conspiracy of certain right-wing elements in government, which survives intact to provide a future challenge, perhaps.