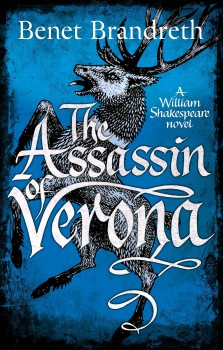 The Assassin of Verona

The young Will Shakespeare faces personal tragedy and political intrigue.

Benet Brandreth – barrister, Shakespeare-lover, rhetoric coach with the RSC, public speaker, fight arranger and martial arts instructor – follows up his debut with the ongoing tale of the immortal playwright’s missing years between Stratford and The Globe.

Low plots, high adventures, escapades and escapes and plenty more Elizabethan high-jinks make this another inventive, suspenseful and ebullient romp. But this story, set partly in Venice and part in the forests of Veneto around Verona, is far darker and more brutal than The Spy of Venice.

Not only does the young Will face a personal tragedy which temporarily robs him of both his wit and will, but he must also evade assassins despatched by the Pope to ensure he and his companions, the fat, vain, Oldcastle and the deadly dancing master Hemminges, cannot return to England with vital secret information.

As with all Elizabethan dramas, England’s then undeclared and ongoing war with the mighty Spanish Catholic empire provides a violent background. The new Medici Pope, Sixtus V has determined on a ‘church militant’ which will stop at nothing to topple the heretic Queen. Spies, assassins and a fanatical squad of priests charged with destroying all opposition to the Papal will, including an Englishman so obsessed as to be almost inhuman – there are historical examples of this type and Father John Gerard was a major mover behind the Gunpowder Plot less than 50 years after the events of this book – all conspire to thwart the three friends.

Their deception in Venice, where they have impersonated the dead ambassador and his staff, is running thin. As the Pope’s agents close in, they must flee the Republic, the Elizabethan home of international intrigue. His companions are desperate to leave, but Will is tied as his lover, the beautiful Isabella, grows ever more ill. Tensions reach breaking point and the three split.

Brandreth blends the historical background into an inventive, suspenseful and ebullient romp, filled with wonderful dialogue, clever wordplay, packed with allusions to Shakespeare’s work – scholars will recognise bits of the plot of at least four plays – and plenty of violent action.

In a second strand to his story, in nearby Verona, their first post of call, Aemelia, daughter of the city’s beleaguered Duke, struggles to keep her growing love for her cousin Valentine from her choleric father. The couple decide they have no option but to seek a life in the Veneto forests, which Valentine, a poet with little idea of life away from a noble house, paints as idyllic.

Their stories converge as, attacked by bandits led by a nobleman seeking revenge on his murderous brother, Oldcastle and Hemminges take refuge with Amelia’s father. When Will finally follows his friends he is waylaid by the same bandits and accepted into their group, where he increasingly shows a selfish and manipulative side to his character. Plots are hatched and discovered, all those involved fall in and out of love and disguises are adopted and discarded.

Strong, well fleshed-out and colourful characters, a fast-moving and interesting plot and some good set-piece scenes, plus Brandreth’s stylish writing, which rejoices in its wordplay and his love of allusions, will keep you guessing to the dramatic, blood-soaked end.

Some readers may find the beautifully authentic Shakespearian language a tad over-wordy and a detraction from what is a unique and compelling thriller, otherwise full of a swaggering charm, some breathless action and rapier-sharp dialogue. Some might even question Shakespeare’s own rather morose and downbeat role, but there are many engaging moments, lovely descriptions and nice touches of narrative technique to keep everyone entertained.