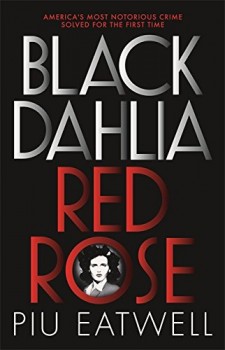 On January 15 1947, the dismembered corpse of beautiful 22-year-old Elizabeth Short was discovered on waste ground in Los Angeles. Her looks and the brutality inflicted on her body inspired a frenzy of interest in her and her life as a goodtime girl, her raven locks earning her the name ‘Black Dahlia’. Soon a manhunt was underway, with both police and news reporters determined to be the first to find the Black Dahlia’s killer, but despite a huge investigation, no one was brought to justice. This book re-examines the murder and the key players, and offers a solution to the crime that shocked America.

The author is a British lawyer, and she draws on a huge number of disparate resources including newspaper reports, police files and interviews to re-investigate the crime. Each character in the drama is fully examined – detailing both their backstory and their involvement in the Black Dahlia investigation. What emerges is a tangled web of conflicting interests: the power of the newspapers, able to buy witnesses in order to get the scoop, pitted against the corrupt police, always on the back foot with the investigation and desperately trying to control the release of information. Chapter titles and the gritty retelling of the murder pay homage to the golden age of noir crime fiction which this story, with its tones of seedy glamour, desperation and greed, mirrors so closely.

This is a detailed and considered re-examination of the case, but the sheer weight of detail is its downfall. In a single paragraph I counted the introduction of five new players. Each person is given meticulous backstory and description, and after a while this becomes confusing. There is an extensive list of dramatis personae, but constantly flipping back and forth is distracting and it’s all too easy to lose the thread of the story. There is also too much foreshadowing, of the sort ‘there is also another clue but I’m not going to tell you what it is until later in the book’, which means that the reader is denied the pleasure of starting to piece the evidence together for themselves.

The book is undoubtedly intelligent, well-researched and thorough, but requires meticulous reading and concentration.