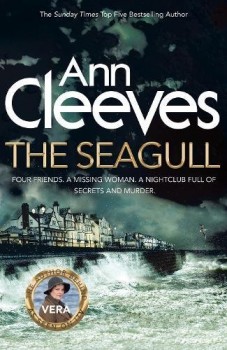 DI Vera Stanhope has been persuaded to give a talk to inmates at Warkworth Prison. At the end she is approached by a prisoner in a wheelchair whom she recognises. He says he has information that she would be interested in hearing. Reluctantly she agrees to listen to what he has to say.

This is a story of corruption within the local community set in the area of Whitley Bay. Years before, there had existed what became known later as ‘the gang of four’. One of them was DI Vera Stanhope’s own father, Hector. The others were police superintendent John Brace, Robbie Marshall and a rather mysterious figure known simply as ‘the Prof’. The friendship was based on the countryside where they spent many hours, and from which they made a profit via the stealing of birds’ eggs and raptors. More seriously, it had subsequently emerged that they had been responsible for providing ‘muscle’ wherever it was required.

At the opening of the story Hector is dead and Marshall had disappeared years ago. Brace is serving time in prison, having been found guilty of complicity in the death of a gamekeeper. The mysterious ‘Prof’ remains a mystery and is no longer around.

The first chapter finds Vera giving a talk to inmates of Warkworth Prison. At the end of it she is approached by a prisoner in a wheelchair who says he has information she would like to hear. Reluctantly she agrees to listen to what he has to say. Part of this reluctance stems from the identity of the prisoner – John Brace, her father’s old friend. She is inevitably reminded of her childhood and the part her father, Hector, played in it.

In this novel there is no mention of Vera’s mother, except that when Vera was a child she wasn’t there. She was cared for – assuming that is the right expression – by her father, who was, if not actually abusive, at best insensitive and at worst cruel. It was a lonely childhood which ended only when she became a police cadet at the age of 16. It becomes easy to see why Vera is always so sympathetic - to the lonely and deprived Patty, for example, abandoned by her husband, or to Robbie Marshall’s widowed mother, Pauline, whose son had simply disappeared many years before.

The information that Brace has concerns the death of Robbie Marshall and the whereabouts of the body. He says that he has MS and in return would like Vera to keep an eye on his daughter, Patty, who has been deserted by her husband and has three children to support. She agrees and when she visits the site indicated finds that it actually contains two bodies, one of which is Marshall.

The identity of the second, however, is not so easy and the investigation takes up the remainder of the book. It is described in detail – perhaps occasionally in too much detail – but it always holds the reader’s attention, even if the identity of the villain is not too difficult to guess.

As a police procedural it is very well set out but it is much more than this because we learn more and more about the members of Vera’s team as they go about their business and become involved in their efforts. We feel that the overall humanity they exercise in interviewing stems from Vera’s influence, something that adds to the reader’s involvement. The author’s sense of place is also excellent and we feel ourselves part of Whitley Bay and its surrounds, particularly

There is an occasional tendency on the part of the author to overdo the coincidence factor. There is every reason, for example, to interview a woman who runs a shop next to one in which a murdered man is found, but no reason at all why she should later turn out to be related to one of the main characters. However, this is merely a quibble and will not prevent the reader from enjoying what is once again a very good crime novel,