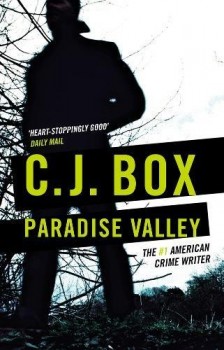 Cassie Dewell has spent years tracking a serial killer known as the Lizard King. An attempt at a trap goes spectacularly awry so Cassie must find another route to finally bring him down.

Cassie Dewell is chief investigator for the Bakken County sheriff in North Dakota. After previous history with Ronald Pergram, aka the Lizard King, detailed in The Highway and Badlands, she is determined to bring him to justice. Pergram is a trucker and Cassie sets up a phony haulage contract to lure him in, but Pergram is not fooled and exacts a terrible price. Avery Tibbs, the county attorney, uses the failure of Carrie’s initiative to get her dismissed from office.

She’s at a loose end, and takes up an offer to investigate the disappearance of two boys, Kyle and Raheem, on behalf of Kyle’s grandmother Lottie. Her efforts bear fruit and it becomes evident that their fate is mixed up with that of Pergram. A few sharp guesses put her on the right track only to find that Tibbs, and sneaky FBI agent Rhodine, plan to capitalise on her investigative skill. Carrie is worried that their clumsy approach may put the lives of Pergram’s hostages at risk.

After her loss of official position, the help Cassie receives from various law enforcement agencies may seem dubious, but this is justified through the excellent informal links established over many years with local police in Montana, where the chase ends up, and with Leslie Bohaunek, a North Carolina prosecutor. Cassie’s persistence and insight fully justifies their confidence and appreciation.

CJ Box shows that his character portrayals are not limited to masculine types like Joe Pickett: Cassie’s world is filled in convincingly, detailing her frustrations both as a law enforcement officer and as a mother of 12-year-old Ben and daughter of ex-hippie Isabel. The sections dealing with Pergram make him a credible antagonist, too, notwithstanding his warped and terrifying behaviour.

All the action takes place in North Dakota and East Montana, a place thinly populated with many of Norwegian heritage: ‘’You said ‘yah, yah’ while someone spoke and ‘you betcha’ when you agreed with them.’’ Box’s normal lyricism about the local mountains and wildlife is given only limited rein, but something of the ruggedness of the terrain come through in the people. A great example is Bull Mitchell, an old man with a lifetime of experience as a trail guide, who takes Cassie up into the mountains for the final showdown.

A certain amount of backstory is necessary to bring readers up to speed with the two earlier books in the series, but this is done without slowing the action significantly. At any event, the gripping plot soon makes it difficult to take a break for reasons other than a house fire or other major emergency, and the final pages produce a truly satisfying conclusion. It’s great stuff.