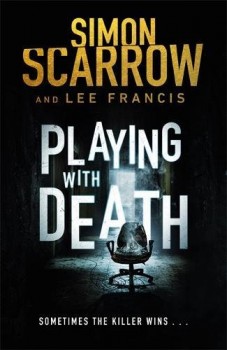 The more FBI Special Agent Rose Blake investigates, the more she realises that a twisted video game has only one outcome – murder.

FBI Special Agent Rose Blake, has more than an increasingly distant husband and an Asperger’s teenage son to cope with. She is still recovering seven months on from on investigation that went horrifically wrong. The memories of Shane Koenig’s escape from his isolated cabin, and the trail of deaths he left behind haunt her waking hours, but Rose must move forwards. And when the call comes in about a suspicious death from arson, she abandons her family dinner, and is on the scene within minutes.

The victim, a loner, is dead in his chair in front of his computer, burned in what looks like a wetsuit. There is no sign of forced entry or of accelerant. It looks like suicide, but the cards don’t stack up. And the further Rose investigates, the more she realises this could be a twisted video game. Worse still, her nemesis, Koenig looks to be back on the murder trail, with her son a future victim.

Simon Scarrow and Lee Francis whetted my appetite right from the start. They jump straight into a scene oozing with danger and only one possible outcome. And from that moment, we know the escaped serial killer is part of the story. Certainly, my thoughts drifted to the overused possibilities of plot; the killer strikes again, a copycat taking over where the main serial killer left off, as seems to be the fashion with police procedurals. However, the plot is sufficiently intriguing that there is not too much of a feeling of déjà vu.

The story is written in the third person present tense, with relatively short chapters, and moves forwards at a good pace. Unusually for police procedurals, several chapters are devoted to Rose’s husband, Jeff, and his extra-marital temptations. The why becomes evident, and is relevant to the plot.

There is quite a large list of secondary characters, who remain flat and undeveloped, but a reasonable insight into the main players is given. Unfortunately, they are somewhat stereotyped, particularly Rose with her emotional baggage and testing home-life, and Koenig with his done-to-death backstory. That said, Rose is likeable and believable, and Koenig’s motivations are credible.

I can’t decide if the story takes me on an incredible voyage or an implausible voyage to Lalaland. Without handing out spoilers, the perpetrator of the recent crimes is exposed long before the end of the book, and the reader should feel that reading Playing with Death truly has been a novel, dark and disturbing experience. Unfortunately, a few loose ends left my suspension of disbelief clinging on for dear life.

The story gives a good sense of time and is extremely current with much of the plot hanging onto innovative technology. Place is another matter. Yes, it is set in America, but it could be Las Anywhere, and at times I forgot where the milieu was supposed to be.

Although the dialogue is generic, the overall writing style is confident, lending itself to a fast and easy read, feasible in one sitting. There is a degree of over-explanation. Perhaps it is because the authors are taking their readers down a relatively new path. But I had a feeling of being lectured to, as if I was incapable of dot-connecting.

For pure escapism, this is a fun, if graphic page-turner. It’s one to make me even more sceptical about video games and where we are all heading!