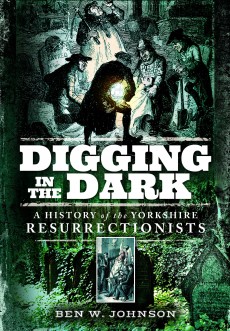 Digging in the Dark

A history of the Yorkshire resurrectionists: body snatchers who robbed graves and sold the cadavers to medical schools for research.

Prior to the 1832 Anatomy Act, the only corpses legally supplied to medical schools for dissection were those of executed criminals. As more medical schools opened, demand soon outstripped supply. The resurrectionists fulfilled this demand, identifying fresh burials, removing the deceased during the night, and selling on the body. If caught, their punishment was relatively lenient: judges understood the trade to be a necessary one and one the legislature was slow to address. There were, however, some resurrectionists who turned to murder to ensure a supply of fresh corpses for sale.

This book focusses on Yorkshire resurrectionists. It adopts a loose definition of resurrection to apply to anyone who exhumes a corpse, and the introduction includes an account of Dick Turpin, whose body was exhumed so it could be exhibited, and John Bartendale, who was exhumed alive after surviving the hangman’s noose. Chapter One covers Burke and Hare – neither Yorkshire-based nor resurrectionists, but murderers who sold their victims to the Edinburgh medical school – to illustrate both the circumstances that led to an illegal supply of corpses, and the case that precipitated the passing of the Anatomy Act and an end to the resurrectionists’ trade. It serves as a good general introduction to themes that are explored throughout the book.

The cases described cover resurrectionists of all types – the well-to-do, the avaricious, the vicious, and the gormless. It shows how they identified which corpses would fetch a high price, the implements they used, how some of them joined forces to assist their activities, and how they shipped their cargo to the medical schools. Of particular interest is the discussion of the ‘trade route’ between Yorkshire and Edinburgh: exhuming corpses in Yorkshire and sending them north where they were less likely to be recognised.

Two issues really made me think. Firstly, that throughout the country, thousands of bodies were exhumed, and as the resurrectionists tended to cover their tracks by filling in the graves, presumably many of the thefts went undetected. Secondly, the need to inter bodies post-dissection relied on crooked sextons who were willing to bury the bodies in mass pits. It’s strange to think that our churchyards must have both thousands of empty graves and pits full of unidentified skeletons to this day as a result.

In writing about this subject, there is a temptation to veer either towards the blackly comic or the gruesomely gothic; Ben Johnson wisely avoids both. He is at pains to name the victims of the resurrectionists and show the suffering the practice wrought on the families of the deceased. His material is carefully researched and presented within its social and historical context, both in terms of wider developments in law and medicine and in terms of the specific area where the crimes occurred. There is good use of original sources to demonstrate how people at the time reacted to events, and the book is written in a fluid, accessible style. This is a fascinating read.