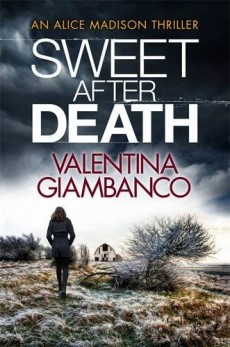 Detective Alice Madison is out of her comfort zone investigating a murder in an isolated town in midwinter.

Detective Alice Madison is out of her comfort zone, when she and her partner DS Kevin Brown and Seattle crime scene investigator Amy Sorensen are assigned to investigate a murder in Ludlow. It may be a beautiful village in the height of summer, but this is the middle of winter, and the isolated town, surrounded by mountains and woods, is a dark place, hiding darker secrets.

Cut off from the bustle of the city, assisted by the meagre police force, and faced with the first murder Ludlow has ever seen, Alice, Kevin and Amy are struggling to find a motive, let alone the killer. They turn to the mountains, convinced there is evil looking down on them. Then the killer strikes again, and the team becomes the target.

A well written police procedural always appeals to me. I open the book, and think game on. It is almost my personal mission to work out whodunit before the detectives. The opening of Sweet After Death made me hesitate; I was unsure I would even bother finishing the book. The prologue set the scene well. It is powerfully written, and I felt immersed in the remoteness of the milieu. But then the first couple of chapters hopped illogically out of chronology. And I detached myself, feeling distanced and irritated.

I am so glad I kept going. It is an intriguing, involved story with enough twists, turns and sub-plots to keep the reader guessing. There is a reasonable development of the main characters, although I imagine I would have more of a rapport with them if I had read the first three books in this series. None of them come across as overly stereotyped. Even though it is written in the third person past tense, a style which often distances me, there was enough introspection to connect with Alice, and her intensity adds to the roundness of her character.

However, there is a massive cheat in this story. It is rare that I don’t work out the criminal’s identity, but in this book, I didn’t. Yes, I spotted the red herrings. Yes, I worked out the likely suspects. But the killer hid, not through clever writing, but through absenteeism. It was a person so underdeveloped, and virtually unmentioned that even when that person came out from behind the curtain, I had to flip back through the pages to be sure I knew who I was reading about. Although the reveal was feasible and clear, I felt disappointed and conned.

That said, the story is dark, and opens the door on an aspect of family abuse that fascinates me. Although not literary, the writing style is sinewy and senses driven, and curiously addictive. This is a fast-paced, up-to-date read, with a good balance of action, contemplation and description.